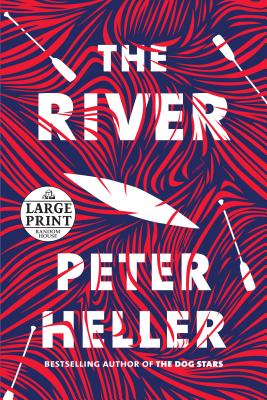 Denver author Peter Heller is a master storyteller, and that talent is on full display in The River, his third novel since bursting onto the world literary scene in 2012 with his New York Times-bestselling debut, The Dog Stars.

Jack and Wynn have been best buddies since their first meeting during freshman orientation at Dartmouth. Wynn is a Vermont farm boy, hulking but sensitive, as likely lost in a book as in the hardwood forests of his native New England. Jack is a Colorado ranch kid to whom, in Wynn’s telling, “sleeping under the stars, cooking on a fire, were as natural as breathing.” Both love the outdoors – flyfishing, camping, and especially whitewater – and it’s in pursuit of these passions that we first encounter the boys on a late August canoe trip down the Maskwa River in northern Canada." ... Read MORE

“Peter Heller can take you on a journey through nature like no other writer. The River is the story of two close friends wanting nothing more than to enjoy their time together on a trip through the Canadian wilderness, and fly fishing has never been so beautifully portrayed nor has the serenity of water and nature. But the peacefulness slowly wanes and the tension begins to build as the trip becomes a race against encroaching forest fires and an attempt to save the life of the mysterious woman they have picked up along the way. Heller has created a story of friendship and survival that should not be missed.”
— Mary McBride, Rainy Day Books, Fairway, KS

A Nominee for the 2020 Edgar Allan Poe Awards

"A fiery tour de force… I could not put this book down. It truly was terrifying and unutterably beautiful." –Alison Borden, The Denver Post

From the best-selling author of The Dog Stars, the story of two college students on a wilderness canoe trip--a gripping tale of a friendship tested by fire, white water, and violence

Wynn and Jack have been best friends since freshman orientation, bonded by their shared love of mountains, books, and fishing. Wynn is a gentle giant, a Vermont kid never happier than when his feet are in the water. Jack is more rugged, raised on a ranch in Colorado where sleeping under the stars and cooking on a fire came as naturally to him as breathing. When they decide to canoe the Maskwa River in northern Canada, they anticipate long days of leisurely paddling and picking blueberries, and nights of stargazing and reading paperback Westerns. But a wildfire making its way across the forest adds unexpected urgency to the journey. When they hear a man and woman arguing on the fog-shrouded riverbank and decide to warn them about the fire, their search for the pair turns up nothing and no one. But: The next day a man appears on the river, paddling alone. Is this the man they heard? And, if he is, where is the woman? From this charged beginning, master storyteller Peter Heller unspools a headlong, heart-pounding story of desperate wilderness survival.

PETER HELLER is the national bestselling author of Celine, The Painter, and The Dog Stars. The Painter was a finalist for the Los Angeles Times Book Prize and won the prestigious Reading the West Book Award, shared in the past by Western writers such as Cormac McCarthy and Terry Tempest Williams, and The Dog Stars, which was published to critical acclaim and lauded as a breakout bestseller, has been published in twenty-two languages to date. Heller is also the author of four nonfiction books, including Kook: What Surfing Taught Me About Love, Life, and Catching the Perfect Wave, which was awarded the National Outdoor Book Award for Literature. He holds an MFA from the Iowa Writers' Workshop in poetry and fiction and lives in Denver, Colorado.

"[T]here is plenty of tension here, but where Heller really scores is the extraordinarily high quality of his writing about the natural world, which is lyrical and action-packed by turns."
–Laura Wilson, The Guardian

"A fiery tour de force… [The River] recalls his debut, The Dog Stars, with its poetic, staccato sentences and masterfully crafted prose… And what a story he tells… I could not put this book down. It truly was terrifying and unutterably beautiful."
–Alison Borden, The Denver Post

"[A] poetic and unnerving wilderness thriller… Full of rushing life and profound consequences. Every move Jack and Wynn make along the river has the chance to kill them or those they’re trying to save, and the result is a novel that sweeps you away, each page filled with wonder and awe for a natural world we can quantify with science but can rarely predict with emotion."
–Tod Goldberg, USA Today

"Heller puts his knowledge of canoeing and currents to fascinating use. He has created indelible characters in Wynn and Jack, pals who are almost exact opposites: the former a bearish galoot who’s convinced that people are basically good, and the latter a pessimist who’s convinced that their only hope for salvation is to paddle as fast as they can."
–Ross Gray, Minneapolis Star Tribune

"Engaging...satisfying... Terse and tight. Short, lyrical paragraphs are packed with action and keep the story moving along... Like a lot of backcountry missions, the most compelling parts of the story aren’t necessarily the rapids or the high-risk moves. Instead they’re the quiet moments where Wynn and Jack are coupling their rods together and wading slowly through vivid, tannic streams."
–Heather Hansman, Outside Magazine

“It is a rare literary feat when an author is able to marry plot and prose with the soaring majesty that Heller achieves in The River.”
–Drew Gallagher, Fredericksburg Free Lance Star

This feature require that you enable JavaScript in your browser.
END_OF_DOCUMENT_TOKEN_TO_BE_REPLACED

This feature require that you enable JavaScript in your browser.
END_OF_DOCUMENT_TOKEN_TO_BE_REPLACED

This feature require that you enable JavaScript in your browser.
END_OF_DOCUMENT_TOKEN_TO_BE_REPLACED