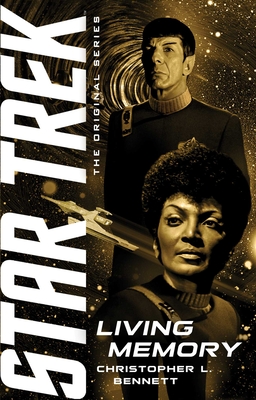 While attempting to settle in as commandant of Starfleet Academy, Admiral James T. Kirk must suddenly contend with the controversial, turbulent integration of an alien warrior caste into the student body—and quickly becomes embroiled in conflict when the Academy controversy escalates to murder. Meanwhile, Captain Spock of the USS Enterprise and Commander Pavel Chekov of the USS Reliant are investigating a series of powerful cosmic storms seemingly targeting Federation worlds—unstoppable outbursts emitting from the very fabric of space. Endeavoring to predict where the lethal storms will strike next, Spock and Chekov make the shocking discovery that the answer lies in Commander Nyota Uhura’s past—one that she no longer remembers….

Christopher L. Bennett is a lifelong resident of Cincinnati, Ohio, with bachelor’s degrees in physics and history from the University of Cincinnati. He has written such critically acclaimed Star Trek novels as Ex Machina, The Buried Age, the Titan novels Orion’s Hounds and Over a Torrent Sea, the two Department of Temporal Investigations novels Watching the Clock and Forgotten History, and the Enterprise novels Rise of the Federation: A Choice of Futures, Tower of Babel, Uncertain Logic, and Live By the Code, as well as shorter works including stories in the anniversary anthologies Constellations, The Sky’s the Limit, Prophecy and Change, and Distant Shores. Beyond Star Trek, he has penned the novels X Men: Watchers on the Walls and Spider Man: Drowned in Thunder. His original work includes the hard science fiction superhero novel Only Superhuman, as well as several novelettes in Analog and other science fiction magazines.

This feature require that you enable JavaScript in your browser.
END_OF_DOCUMENT_TOKEN_TO_BE_REPLACED

This feature require that you enable JavaScript in your browser.
END_OF_DOCUMENT_TOKEN_TO_BE_REPLACED

This feature require that you enable JavaScript in your browser.
END_OF_DOCUMENT_TOKEN_TO_BE_REPLACED