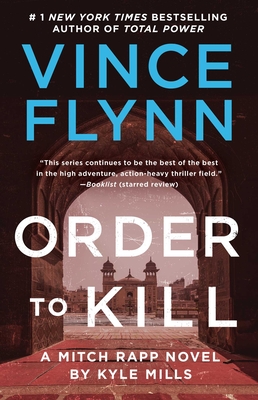 This is book number 15 in the A Mitch Rapp Novel series.

America’s deadliest covert operative might have met his match as he goes deep undercover to prevent Russia from fomenting chaos in the Middle East in this action-packed novel in the #1 New York Times bestselling series starring Mitch Rapp—“the best hero the thriller genre has to offer” (The Real Book Spy).

Mitch Rapp is used to winning.

But the CIA operative finds himself chasing false leads from continent to continent in an effort to keep Pakistani nukes from falling into the hands of terrorists. Together with friend and colleague Scott Coleman, Rapp struggles to prevent the loss of these lethal weapons, particularly because Russia is also interested in the nukes, though not for the same reason as Rapp and Coleman.

Soon, it becomes alarmingly clear that the forces in Moscow are bent on fomenting even more chaos and turmoil in the Middle East, and Rapp must go deep into Russian territory, posing as an American ISIS recruit. There, he uncovers a plan much more dangerous and insidious than he ever expected, one that could have far-reaching and catastrophic consequences.

Another “best of the best in the high-adventure, action-heavy thriller field” (Booklist, starred review), Order to Kill is a provocative and timely roller-coaster ride of a novel.

Kyle Mills is the #1 New York Times bestselling author of twenty-three political thrillers, including Total Power, Lethal Agent, and Red War for Vince Flynn and The Patriot Attack for Robert Ludlum. He initially found inspiration from his father, the former director of Interpol, and still draws on his contacts in the intelligence community to give his books such realism. Avid outdoor athletes, he and his wife split their time between Jackson Hole, Wyoming, and Granada, Spain. Visit his website at KyleMills.com or connect with him on Twitter, Facebook, and Instagram @KyleMillsAuthor.

"This series continues to be the best of the best in the high-adventure, action-heavy thriller field . . . . Flynn's name, Flynn's characters, and Mills' skill will take this one to the top of the charts, territory already familiar to Mitch Rapp."
— Booklist (starred review)

"Just as compelling as when Flynn was doing the writing . . . . Satisfied fans will hope that Mills will fulfill their continuing Mitch Rapp needs far into the future."
— Publishers Weekly (starred review)

"Flynn is a master--maybe the master--of thrillers in which the pages seem to turn themselves."
— Book Reporter

“What thriller readers live for: tense and dramatic with a nice twist.”
— Kirkus Reviews

"Kyle has done a top-notch job of blending the beloved characters of Irene Kennedy and Mitch Rapp with a high adventure, action packed plot."
— Military Press

"Written with breathless tension and heart-pounding action, Mitch Rapp's latest adventure is as timely and provocative as ever."
— Lazy Day Books

This feature require that you enable JavaScript in your browser.
END_OF_DOCUMENT_TOKEN_TO_BE_REPLACED

This feature require that you enable JavaScript in your browser.
END_OF_DOCUMENT_TOKEN_TO_BE_REPLACED

This feature require that you enable JavaScript in your browser.
END_OF_DOCUMENT_TOKEN_TO_BE_REPLACED