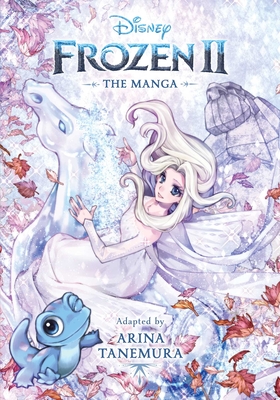 Why was Elsa born with magical powers? The answer is calling her and threatening her kingdom. Together with Anna, Kristoff, Olaf, and Sven, she’ll set out on a dangerous but remarkable journey to discover her past in order to save their future. Are Elsa’s powers enough to see her through their adventure into the unknown?

Arina Tanemura began her manga career in 1996 when her short stories debuted in Ribon Original magazine. She gained fame with the 1997 publication of I.O.N, and ever since her debut Tanemura has been a major force in shojo manga with popular series Phantom Thief Jeanne, Time Stranger Kyoko, Full Moon, The Gentlemen’s Alliance †, and Sakura Hime: The Legend of Princess Sakura. Both Phantom Thief Jeanne and Full Moon have been adapted into animated TV series.

This feature require that you enable JavaScript in your browser.
END_OF_DOCUMENT_TOKEN_TO_BE_REPLACED

This feature require that you enable JavaScript in your browser.
END_OF_DOCUMENT_TOKEN_TO_BE_REPLACED

This feature require that you enable JavaScript in your browser.
END_OF_DOCUMENT_TOKEN_TO_BE_REPLACED