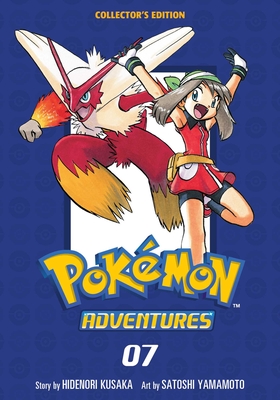 This is book number 7 in the Pokémon Adventures Collector’s Edition series.

All your favorite Pokémon game characters jump out of the screen into the pages of this action-packed manga!

A stylish new omnibus edition of the best-selling Pokémon Adventures manga, collecting all the original volumes of the series you know and love.

Ruby and Sapphire find out that Archie and Maxie, the leaders of evil Team Aqua and equally evil Team Magma, are using the Blue Orb and the Red Orb to control two Legendary Pokémon, Kyogre and Groudon. As the two Trainers struggle with their opponents, they also discover a mysterious connection between their own memories of the past. Can they figure out the secret in time to awaken three Pokémon that can save the day?

This feature require that you enable JavaScript in your browser.
END_OF_DOCUMENT_TOKEN_TO_BE_REPLACED

This feature require that you enable JavaScript in your browser.
END_OF_DOCUMENT_TOKEN_TO_BE_REPLACED

This feature require that you enable JavaScript in your browser.
END_OF_DOCUMENT_TOKEN_TO_BE_REPLACED