I Will Die in a Foreign Land (Paperback) 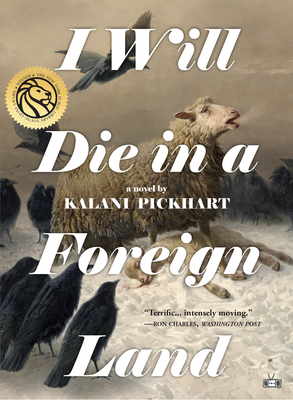 A century later, in November 2013, thousands of Ukrainian citizens gathered at Independence Square in Kyiv to protest then-President Yanukovych's failure to sign a referendum with the European Union, opting instead to forge a closer alliance with President Vladimir Putin and Russia. The peaceful protests turned violent when military police shot live ammunition into the crowd, killing over a hundred civilians.

I Will Die in a Foreign Land follows four individuals over the course of a volatile Ukrainian winter, as their lives are forever changed by the Euromaidan protests. Katya is an Ukrainian-American doctor stationed at a makeshift medical clinic in St. Michael's Monastery; Misha is an engineer originally from Pripyat, who has lived in Kyiv since his wife's death; Slava is a fiery young activist whose past hardships steel her determination in the face of persecution; and Aleksandr Ivanovich, a former KGB agent, who climbs atop a burned-out police bus at Independence Square and plays the piano.

As Katya, Misha, Slava, and Aleksandr's lives become intertwined, they each seek their own solace during an especially tumultuous and violent period. The story is also told by a chorus of voices that incorporates folklore and narrates a turbulent Slavic history.

While unfolding an especially moving story of quiet beauty and love in a time of terror, I Will Die in a Foreign Land is an ambitious, intimate, and haunting portrait of human perseverance and empathy.

"Kalani Pickhart's timely debut novel, I Will Die In a Foreign Land, is about the 2014 Ukrainian revolution which provided a pretense for Russia to annex Crimea. The story follows the experiences of several characters whose lives intersect as the country's political situation deteriorates. There's a Ukrainian-American doctor, an old KGB spy, a former mine worker, and others, and these episodes are interspersed with folk songs, news reports and historical notes. The effect--kaleidoscopic but never confusing--provides an intimate sense of a country convulsing, mourning, and somehow surviving."
--CBS News, "The Book Report: Recommendations from Washington Post critic Ron Charles"
(Watch the full video on CBS News, February 6, 2022).

This feature require that you enable JavaScript in your browser.
END_OF_DOCUMENT_TOKEN_TO_BE_REPLACED

This feature require that you enable JavaScript in your browser.
END_OF_DOCUMENT_TOKEN_TO_BE_REPLACED

This feature require that you enable JavaScript in your browser.
END_OF_DOCUMENT_TOKEN_TO_BE_REPLACED