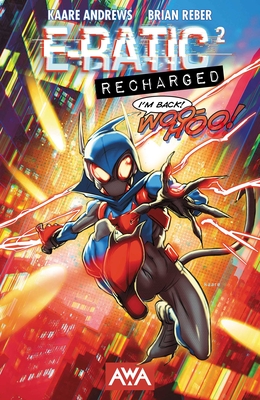 As a Reborn, Oliver Leif possesses awesomely immense superpowers—that only last for 10 minutes a day. Is that enough time to save the barbarian princess from another world? The seconds are counting down!

The teenage hero with superpowers that only work for ten minutes a day is back to save the world again as he navigates even more pressing perils: young love, bullies, a broken family and the gauntlet that is high school.

This time, young Oliver Leif is teamed with a barbarian princess who claims to be from another dimension. Can E-Ratic survive the horrors of high school, dimensional invasions…and young love? He's got 10 minutes to find out!

Kaare (rhymes with Atari) is the only director in the world working simultaneously in comics, film and TV.

His film, SNIPER: ASSASSIN’S END was released in summer of 2020 for Sony and hit #1 on iTunes. Some of his TV credits include V WARS for Netflix, VAN HELSING, AFTERMATH for SyFy, the live action pilot SIBLINGS for Cartoon Network, and MECH X-4 for Disney. Kaare has been featured in Vice, USA Today and Hollywood Reporter.

This feature require that you enable JavaScript in your browser.
END_OF_DOCUMENT_TOKEN_TO_BE_REPLACED

This feature require that you enable JavaScript in your browser.
END_OF_DOCUMENT_TOKEN_TO_BE_REPLACED

This feature require that you enable JavaScript in your browser.
END_OF_DOCUMENT_TOKEN_TO_BE_REPLACED