The Testimony of Jesus: Past, Present, and Promise (Hardcover) 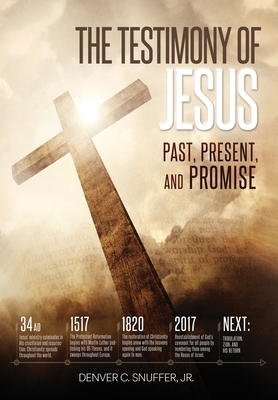 What is Authentic Christianity?

Currently, there are approximately 40,000 different Christian churches and denominations. If you go back only 500 years, most of what you regard as Christianity would not have existed. If you go back earlier still, your Christian belief (including the current form of Catholicism that is practiced) would be regarded as heretical by the Roman Catholic hierarchy. Merely 500 years ago, the only authorized forms of the Bible were printed in Latin, and they were the exclusive property of a Catholic clergy who taught in Latin. Christians were a group of people who were told what to do, what to believe, and how to regard Christianity.

When Luther, Calvin, Knox, Zwingli, Simons, and others started to oppose Catholic abuses, there was an eager audience wishing to be freed from Catholic domination. The protests unleashed against Catholicism quickly spread throughout Europe. Once Protestant leaders published the Bible in the language of the common man, an aloof and educated clergy lost their monopoly over access to and the right to interpret Scripture. Every soul was entitled and expected to read the Bible for themselves.

Today, Christianity is a fragmented, quarreling, and inconsistent patchwork of denominational sects, many of which claim that they alone offer the truest form of Christianity. There have been many Christian thinkers who longed to see Christianity drop its internal disputes and find common ground. C.S. Lewis in Mere Christianity, Billy Graham, Charles Russell, and many others have made attempts to help Christianity find common agreement.

The question remains, however, whether it is enough to protest and reform an apostate Christianity. Roger Williams concluded that reformation could never establish Christianity back to its original, but a restoration would be required for that. Once lost, only God could bring it again.

Unfortunately, the form of Christianity that almost every one of us holds in our hearts and that we look to in faith-believing that it has the power to save-would be regarded throughout the majority of Christian history as heresy, false, and damnable.

Is God the author of such chaos and confusion? How do we know which doctrine, belief, or sect is "true," or are they all wrong? Or perhaps more importantly, if God is not the author of such religious institutions and sects, what has He been up to for hundreds of years?

We are approaching the moment at which the Lord is about to return. Read Matthew 24: All of the signs that He speaks of will occur in one single generation. If you've not noticed, the signs have begun to appear. It means you're living within a generation in which a great deal is to occur. As it was in the days of Noah, so is it about to be. That means dreadful things are coming, on the one hand, and it means prophets are going to be among us again, people with messages that come from the Lord.

The Testimony of Jesus: Past, Present, and Promise addresses these and other important topics and questions facing Christians today. It can help you recognize more fully what is underway today as God continues the restoration of His original Gospel, and the preparation of His people to build New Jerusalem and establish Zion in this generation. Every person committed to following Christ should be interested in learning the surprising answers about what God is doing today to restore authentic Christianity.

Topics covered include Christianity, Jewish apologetics and theology, Hebrew and Greek translation of the Old and New Testament; KJV, NKJV, NIV, NASB, CSB, NLT, ESV, study and commentary bibles, apocrypha, and other sacred testaments and holy books that witness of the life of Jesus Christ; Jesus calling men and women as devotional preachers, the Sermon on the Mount, the Second Comforter.

This feature require that you enable JavaScript in your browser.
END_OF_DOCUMENT_TOKEN_TO_BE_REPLACED

This feature require that you enable JavaScript in your browser.
END_OF_DOCUMENT_TOKEN_TO_BE_REPLACED

This feature require that you enable JavaScript in your browser.
END_OF_DOCUMENT_TOKEN_TO_BE_REPLACED