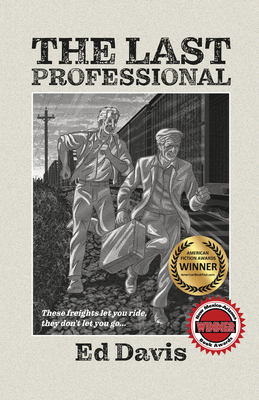 Lynden Hoover is on the brink of a new beginning with a fast-growing tech company, but he first needs to confront the traumas of his past. At age eleven Lynden found a surrogate father in the form of a hobo riding a train, the Tramp, who abused and discarded Lynden. The memory of the Tramp has haunted Lynden's life, ruining his relationships. Now Lynden makes a snap decision, leaping into an open boxcar to find the Tramp and somehow punish him.

There Lynden meets The Duke, a hobo who calls America’s landscape his home. He’s “Profesh” and clings to an honor code quickly fading into the past. The Duke has his own secrets, fleeing from the merciless Short Arm, a one-time friend who now wants The Duke dead. The Duke reluctantly agrees to teach Lynden how to be a Professional hobo, all while trying to stay ahead of the relentless Short Arm.

As Lynden and The Duke travel the rails a unique friendship forms, more than just that of mentor and apprentice. A special bond is formed as secrets are exposed, sacrifices made, and trusts are betrayed. Three determined people hurtle toward a spellbinding climax where pasts and futures collide, and lives hang in the balance.

Ed Davis began his writing career over forty years ago, pausing in boxcars, under street lamps, and in hobo jungles to capture the beats and rhythms of the road as he caught freight trains and vagabonded around the Pacific Northwest and Canada. The Last Professional began in a boxcar. His short stories have appeared in numerous literary journals. His novella, In All Things, and his collection of travel pieces, Road Stories, have both been Amazon Top Ten bestsellers. Ed’s death row thriller, A Matter of Time, was written in real time, twenty-four hours, as the last day of the hero’s life unfolds.

"The Last Professional invites us to take a leap, hang on, and discover a secret world far from our comfortable lives. In this beautifully written story, Ed Davis draws readers into the shadows to discover a vanishing brotherhood who, despite their raw, gritty, and sometimes desperate ways, elicit our respect for their absolute commitment to freedom. You will never see a passing freight train the same way again." —Fran Braga Meininger, author of The Years Beyond Youth

"A man rides the rails in the pilgrimage novel The Last Professional, which proposes a free-spirited interpretation of the American dream and celebrates lost traditions." —Mari Carlson, Foreword Reviews

"The Last Professional accurately portrays the sense of adventure and looming dangers that come with living a nomadic life." —Pikasho Deka, reviewer for Readers' Favorite

"The book reads like an amalgam of adventure and drama, with a touch of Cormac McCarthy-esque neo-noir." —Colin Jordan, Medium

"Part Peckinpah, part Stephen King’s Stand By Me, and part something else entirely – The Last Professional feels honestly like escapism done right. The kind that completely envelopes you, with dream-like seduction, in a fully realized and fleshed out environment." —Daily Pop News

"Davis presents readers with an adventure that also works well as a tribute to the past, effectively using the perspective of a young character to capture what feels like the last glimpse of a disappearing culture." —Kirkus Reviews

This feature require that you enable JavaScript in your browser.
END_OF_DOCUMENT_TOKEN_TO_BE_REPLACED

This feature require that you enable JavaScript in your browser.
END_OF_DOCUMENT_TOKEN_TO_BE_REPLACED

This feature require that you enable JavaScript in your browser.
END_OF_DOCUMENT_TOKEN_TO_BE_REPLACED