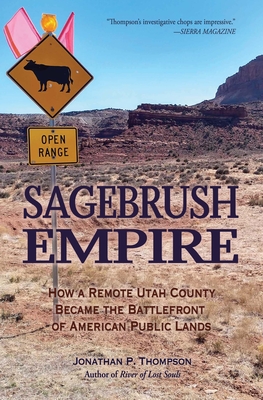 Thompson's investigative chops are impressive.
--SIERRA MAGAZINE San Juan County, Utah, contains some of the most spectacular landscapes in the world, rich in natural wonders and Indigenous culture and history. But it's also long been plagued with racism, bitterness, and politics as twisted as the beckoning canyons. In 2017, en route to the Valley of the Gods with his spouse, a Colorado man closed the gate on a corral. Two weeks later, the couple was facing felony charges. Award-winning journalist Jonathan P. Thompson places the case in its fraught historical context and--alongside personal stories from a life shaped by slickrock and sagebrush--shows why this corner of the western United States has been at the center of the American public lands wars for over a century.

This feature require that you enable JavaScript in your browser.
END_OF_DOCUMENT_TOKEN_TO_BE_REPLACED

This feature require that you enable JavaScript in your browser.
END_OF_DOCUMENT_TOKEN_TO_BE_REPLACED

This feature require that you enable JavaScript in your browser.
END_OF_DOCUMENT_TOKEN_TO_BE_REPLACED