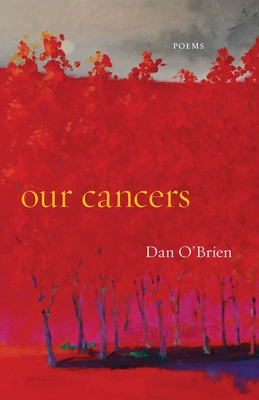 Poet and playwright Dan O’Brien chronicles the year and a half during which both he and his wife were treated for cancer.

On the fourteenth anniversary of 9/11—an event that caused their downtown apartment to become “suffused with the World Trade Center’s carcinogenic dust”—Dan O’Brien’s wife discovers a lump in her breast. Surgery and chemotherapy soon follow, and on the day of his wife’s final infusion, O’Brien learns of his own diagnosis. He has colon cancer and will need to undergo his own intensive treatment over the next nine months.

Our Cancers is a compelling account of illness and commitment, of parenthood and partnership. This spare and powerful sequence creates an intimate mythology that seeks meaning in illness while also celebrating the resilience of sufferers, caregivers, and survivors.

As O’Brien explains in an introduction, “The consecutiveness of our personal disasters, with a daughter not yet two years old at the start of it, was shattering and nearly silencing. At hospital bedsides, in hospital beds myself, and at home through the cyclical assaults of our therapies, these poems came to me in fragments, as if my unconscious were attempting to reassemble our lives, our identities and memories . . . as if I were in some sense learning how to speak again.”

Dan O’Brien is a poet and playwright. His previous poetry collections include War Reporter, New Life, and Scarsdale. O’Brien is the recipient of a Guggenheim Fellowship in Drama and two PEN America Awards for playwriting. He lives in Los Angeles with his wife and daughter.

"[A] powerful [meditation] on being a husband, a father, and a human while dealing with the very real possibility that it could all come to an end."
— Katie Couric Media

This feature require that you enable JavaScript in your browser.
END_OF_DOCUMENT_TOKEN_TO_BE_REPLACED

This feature require that you enable JavaScript in your browser.
END_OF_DOCUMENT_TOKEN_TO_BE_REPLACED

This feature require that you enable JavaScript in your browser.
END_OF_DOCUMENT_TOKEN_TO_BE_REPLACED