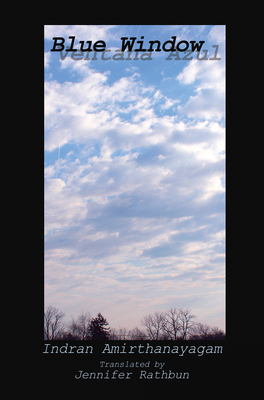 Poetry. Asian & Asian American Studies. African & African American Studies. Latinx Studies. Translated by Jennifer Rathbun. BLUE WINDOW (VENTANA AZUL) captures modern love in all of its contradictory emotions, expressed online, face to face, and in memory. The poems speak to all of our love entanglements and any reader can identify with the love and loss poured into these pages. Acclaimed Chilean poet laureate Ra l Zurita says: Indran Amirthanayagam, as an immigrant of the language, has not only rendered that language a magisterial book, BLUE WINDOW, but also a poem, 'Illusion, ' that is amongst the most moving love poems in the history of Spanish. In these times of the pandemic, where all over the world we have developed a new relationship to the window, among windows, on a Zoom screen with Cyrano moved from the street outside to every windowsill, wherever the internet has travelled, on fiber optic cables set deep into the oceans, on internet balloons flying over large swatches of jungle and brush, bringing people the world over to hear poems of love and loss and love renewed, we give you BLUE WINDOW (VENTANA AZUL).

In our time, it's rare to find poets still writing about the glory of romantic love. A noble tradition, from Sappho to Neruda, seemed to be exhausted. But the poems in BLUE WINDOW read like a gift the Muse has handed down to Indran Amirthanayagam.--Jaime Manrique

In BLUE WINDOW, Indran Amirthanayagam has developed a personal poetic cartography, a geography of dilated air in the shadows. The poetic voice evokes, conjures, and converses with people, moments, places... This volume is a book of farewells, dialogues interrupted by distance, but continued in these pages that were life and are now maps, logbooks of travel, of poetry.--Carlos Aguasaco

This feature require that you enable JavaScript in your browser.
END_OF_DOCUMENT_TOKEN_TO_BE_REPLACED

This feature require that you enable JavaScript in your browser.
END_OF_DOCUMENT_TOKEN_TO_BE_REPLACED

This feature require that you enable JavaScript in your browser.
END_OF_DOCUMENT_TOKEN_TO_BE_REPLACED