An Exhalation of Dead Things (Paperback) 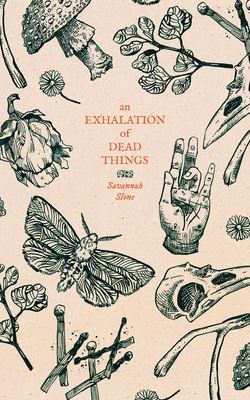 "In a world quick to paper over its cracks and rot, AN EXHALATION OF DEAD THINGS stands in stark contrast, boldly and courageously balancing the beautiful, the abject, and the knowledge that everyone on earth will someday decay and disappear into the grinning void. These poems bring to mind Joseph Campbell's sage words of advice: 'the cave you fear to enter holds the treasure you seek.' Take a read and enter that cave "

"An Exhalation of Dead Things, is an unflinching portrayal of identity and survival. These poems embody a constant state of becoming that is tied to the death and rebirth of self. Through intricate and piercing language, Savannah Slone confronts what is both personal and pivotal-moments that shape who we are despite what we have lost. An Exhalation of Dead Things will challenge readers to contemplate their various selves to ultimately become 'flowers from rust'."

Each poem in Savannah Slone's An Exhalation of Dead Things feels like its own world, with its own nature and religion and laws. And in each new world, the speaker must adapt, must perform multiple "interstellar / breakdowns of Self" in order to survive. This is a book that reimagines and defamiliarizes the human form. Reading An Exhalation of Dead Things feels like watching a John Carpenter movie through your fingers.

"This new collection by Savannah Slone speaks of loss, identity, and grief; of love and bones and bodies; of 'ruined histories' and 'private pathologies.' An Exhalation of Dead Things is a deeply felt and exquisitely crafted work. Sit with these poems, breathe them in, for they are aimed and necessary and unforgettable."

"With incandescent language and an unflinching honesty, An Exhalation of Dead Things performs an excavation of the self's existence in the body and the body's existence in the world. In these poems, we see the self as its 'misplaced fragments': unlit sparklers, trap doors, blank canvases. But just as a blank canvas nonetheless holds the promise of art, so too do these poems by the electric power of their language promise that through excavation one can find if not resolution then understanding, a laying bare of all that is longing, the 'science of urgency' with which the self moves through the world."

- Emma Bolden, Author of House Is an Enigma

This feature require that you enable JavaScript in your browser.
END_OF_DOCUMENT_TOKEN_TO_BE_REPLACED

This feature require that you enable JavaScript in your browser.
END_OF_DOCUMENT_TOKEN_TO_BE_REPLACED

This feature require that you enable JavaScript in your browser.
END_OF_DOCUMENT_TOKEN_TO_BE_REPLACED