Bright Eyes: A Kunoichi Tale (Seasons of the Sword #2) (Paperback) 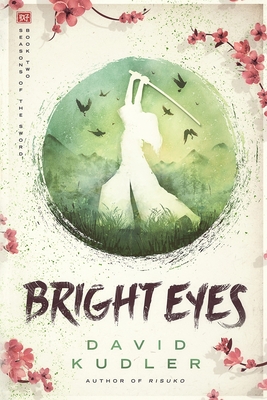 Can one girl stop a killer?

The future of Japan hangs in the balance, and it's up to a girl who likes to climb to save the day

Two armies have descended on the Full Moon, and the war that has torn Japan apart for over a century threatens to destroy Lady Chiyome's school for young shrine maidens (and assassins).

In this thrilling sequel to Risuko: A Kunoichi Tale, Risuko must face warlords, samurai, angry cooks, a monster in the hills, the truth about her father, a spy among the kunoichi...

Someone kills a Takeda lieutenant, staging it to look like suicide. Can Risuko figure out who would do such thing?

And can she keep it from happening again?

Once again David Kudler has fully succeeded as a novelist with a genuine flair for historical fiction populated by memorably crafted characters and decidedly entertaining plot twists and turns. Like the first novel in the author's 'Seasons of the Sword' series, Bright Eyes is imaginative, original, exceptionally well written, and highly recommended - Midwest Book Review

David Kudler crafts an enthralling. unputdownable tale due in no small part to his outstanding world building. He ties enough aspects of real-life feudal Japanese culture to give the perfect balance of reality in this fictional world. ...] The well-crafted mystery, well-honed history and world-building, and Risuko's adventurousness leave the reader wanting more. - Shailyn Rogers, Ind'Tale Magazine

This feature require that you enable JavaScript in your browser.
END_OF_DOCUMENT_TOKEN_TO_BE_REPLACED

This feature require that you enable JavaScript in your browser.
END_OF_DOCUMENT_TOKEN_TO_BE_REPLACED

This feature require that you enable JavaScript in your browser.
END_OF_DOCUMENT_TOKEN_TO_BE_REPLACED