Return to my Native Land (Paperback) 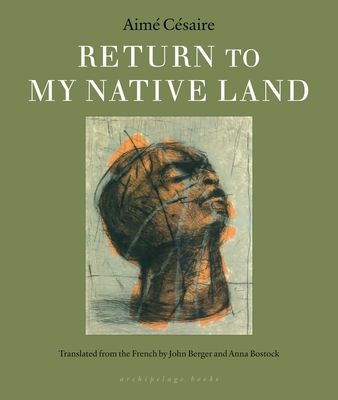 A work of immense cultural significance and beauty, this long poem became an anthem for the African diaspora and the birth of the Negritude movement. With unusual juxtapositions of object and metaphor, a bouquet of language-play, and deeply resonant rhythms, Césaire considered this work a "break into the forbidden," at once a cry of rebellion and a celebration of black identity.

"The greatest living poet in the French language."--American Book Review

"Martinique poet Aime Cesaire is one of the few pure surrealists alive today. By this I mean that his work has never compromised its wild universe of double meanings, stretched syntax, and unexpected imagery. This long poem was written at the end of World War II and became an anthem for many blacks around the world. Eshleman and Smith have revised their original 1983 translations and given it additional power by presenting Cesaire's unique voice as testament to a world reduced in size by catastrophic events." --Bloomsbury Review

"Through his universal call for the respect of human dignity, consciousness and responsibility, he will remain a symbol of hope for all oppressed peoples." --Nicolas Sarkozy

"Evocative and thoughtful, touching on human aspiration far beyond the scale of its specific concerns with Cesaire's native land - Martinique." --The Times

Poet and politician Aimé Césaire was born in Basse-Pointe, Martinique on June 26, 1913. He attended high school and college in France. While in Paris, he helped found the journal Black Student in the 1930s. During World War II, he returned to Martinique and was mayor of Fort-de-France from 1945 to 2001, except for a break from 1983 to 1984. He also served in France's National Assembly from 1946 to 1956 and from 1958 to 1993. In 1946, he helped Martinique shed its colonial status and become an overseas department of France. Some of his best known works include the book Discourse on Colonialism, the essay "Negro I Am, Negro I Will Remain", and Return to My Native Land. He was being treated for heart problems and other ailments when he died on April 17, 2008.

"Nothing less than the greatest lyrical monument of this time." --André Breton

""Aime Césaire's brooding exploration of Negritude bristles with the energetic, unique qualities of Walt Whitman's Song of Myself . . . [Césaire's] protean lyric, filled with historical allusions, serves to exorcise individual and collective self-hatreds engendered by the psychological trauma of slavery and its aftermath." --San Francisco Chronicle

"One of the most powerful French poets of the century." --New York Times Book Review

"The poem pulls no punches. Now tremulous, now grating, the improvised text drums and jabs in spasmodic phrases and slogans. Each encounter, each twist of idiom, thrusts itself into the reader’s mind as a fierce challenge to understand and to empathize." -- Roger Cardinal, The Times Literary Supplement

"A more razor-sharp encapsulation of the situation of African slavery could not be found." --Quarterly Conversation

"Edouard Glissant once wrote that "everything begins with poetry." Aime Cesaire's epic poem was a true beginning in 1939. . . . Return to my Native Land became the rallying cry of decolonization but the fact that it is still read means it has survived as poetry. This translation preserves its poetic force and its reissue is a welcome event." --J. Michael Dash, New York University

"Return to My Native Land is a monumental tome to our times, and this new translation by John Berger and Anya Bostock possesses the tropical heat of the poet’s sonority. Though, in his refrain, Aimé Césaire intones “the small hours,” there isn’t anything small about the raw lyricism articulated into this incantation of fiery wit. The translators convey the spirit of improvisation, yet, with a deftness of image and music, they deliver this book-length poem as a seamless work of art—an existential cry against a man-made void. What translates is the speaker’s revolutionary psyche on to the page—his fierce affirmation of existence through an eloquent clarity of the real and surreal. Nowhere is Césaire’s passion sacrificed; this translation is a tribute to the poet." --Yusef Komunyakaa, New York University

"amazing. . . This level of sophistication is partly why Césaire became a world citizen, mayor, and Martinique’s ambassador to the French Parliament." -- Ebony

This feature require that you enable JavaScript in your browser.
END_OF_DOCUMENT_TOKEN_TO_BE_REPLACED

This feature require that you enable JavaScript in your browser.
END_OF_DOCUMENT_TOKEN_TO_BE_REPLACED

This feature require that you enable JavaScript in your browser.
END_OF_DOCUMENT_TOKEN_TO_BE_REPLACED