The Cactus Plot: Murder in the High Desert (Paperback) 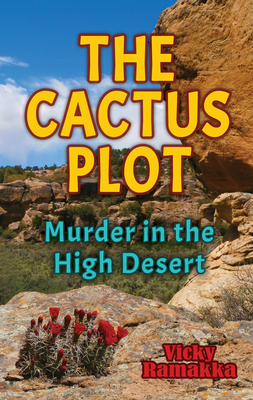 “What have I gotten myself into!” Botanist Millie Whitehall leaves her New Jersey home to take a job in New Mexico. She plans to spend a peaceful summer surveying rare plants. Instead she becomes entangled in two heartless murders. Millie befriends one too many characters that she encounters during her work in the back country. Will it be the friendly oil and gas hand, out-spoken environmentalist, laid-back cowboy, charming foreign tourist, or handsome young Navajo biologist that ends up threatening her life? Cozy mystery lovers will enjoy adventuring along with Millie as she draws on her knowledge of ecology to save an endangered cactus, before she—and the cactus—face extinction at the hands of the murderer.

Vicky Ramakka grew up on a farm in upstate New York which sparked an early interest in plants and animals. She has spent most of her career in higher education in the western US while her husband worked as a wildlife biologist for the Bureau of Land Management. During her career, she published in academic journals, wrote numerous grant applications and reports and a variety of marketing materials. She now she writes about the Four Corners region, where she claims she meets the most fascinating people, who are always willing to share their stories. Her publications have won awards from the New Mexico Press Women. She currently lives in northwest New Mexico with her husband, where Vicky writes and enjoys photographing the flora and fauna that reside in her “back yard” which she considers any place within a mile walk.

"This book could be the seed of a new series of mysteries set in our beautiful Southwest." — Anne Hillerman, New York Times best-selling author of the "Chee-Leaphorn-Manuelito" series.

"Vicky Ramakka’s page-turner, The Cactus Plot does an excellent job at capturing the sense of place and people of Northwestern New Mexico." — Jonathan Thompson, environmental journalist and author of River of Lost Souls: The Science, Politics, and Greed Behind the Gold King Mine Disaster

"Vicky is very descriptive in her mention of Navajo places and events, such as the Shiprock Flea Market. You can just imagine the colorful items, the smells in the air and hear the children wandering among shoppers." — Elaine Benally, Director, San Juan College West

"Ramakka, who lives in Aztec, has written a revealing tale of her home territory. Local environmental journalist Jonathan Thompson...says Ramakka’s mystery “does an excellent job of capturing the sense of place and people of northwestern New Mexico, along with the ins and outs of oil and gas development there.” —Scott Graham, Four Corners Free Press

"This is a delicious, layered Cozy Mystery/Women Sleuth paperback. Tall, gangly young Millie Whitehall takes a job as a botanist for the BLM to survey endangered plants in Four Corners country, New Mexico. An archeologist has just plunged off a cliff and died. But fellow BLM worker, Momma Agnes says, "That don't make sense ... He was strong as an ox and knew the back country better than most." This suspicious death is followed by two more. Millie learns about fracking, contradictions in fed­eral policy and how an oil field hand can back off from a rattlesnake. She is introduced to wild mustangs, Monster Slayer and Changing Woman, and how to make Navajo fry bread. The characters are vivid and eager to share their stories, but the plot is slow to develop. Nevertheless, it's an informed cultural and ecological immersion rolled up in a mystery. Four stars." —Phaedra Greenwood, enchantment Magazine

This feature require that you enable JavaScript in your browser.
END_OF_DOCUMENT_TOKEN_TO_BE_REPLACED

This feature require that you enable JavaScript in your browser.
END_OF_DOCUMENT_TOKEN_TO_BE_REPLACED

This feature require that you enable JavaScript in your browser.
END_OF_DOCUMENT_TOKEN_TO_BE_REPLACED