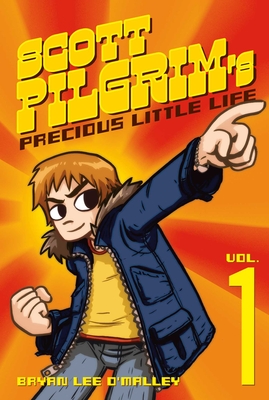 This is book number 1 in the Scott Pilgrim series.

Scott Pilgrim's life is totally sweet. He's 23 years old, he's in a rock band, he's "between jobs," and he's dating a cute high school girl. Nothing could possibly go wrong, unless a seriously mind-blowing, dangerously fashionable, rollerblading delivery girl named Ramona Flowers starts cruising through his dreams and sailing by him at parties. Will Scott's awesome life get turned upside-down? Will he have to face Ramona's seven evil ex-boyfriends in battle? The short answer is yes. The long answer is SCOTT PILGRIM, VOLUME 1: SCOTT PILGRIM'S PRECIOUS LITTLE LIFE.

Bryan Lee O'Malley is a Canadian cartoonist currently living in Los Angeles. His six-volume Scott Pilgrim series was a New York Times bestseller, an LA Times Book Prize finalist, and won an Eisner Award, two Harvey Awards, a Doug Wright Award, and a Joe Shuster Award. In 2010, Scott Pilgrim was adapted into a critically-acclaimed major motion picture (from Universal) and video game (from Ubisoft). His books (including Lost at Sea, Seconds, and Snotgirl ) have been translated into over 20 languages.

This feature require that you enable JavaScript in your browser.
END_OF_DOCUMENT_TOKEN_TO_BE_REPLACED

This feature require that you enable JavaScript in your browser.
END_OF_DOCUMENT_TOKEN_TO_BE_REPLACED

This feature require that you enable JavaScript in your browser.
END_OF_DOCUMENT_TOKEN_TO_BE_REPLACED