This Is Your Everest: The Lions, the Springboks and the Epic Tour of 1997 (Hardcover) 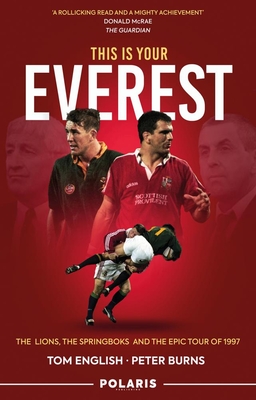 A rollicking read and a mighty achievement' - Donald McRae, The Guardian

The 1997 British & Irish Lions tour to South Africa is one of the most iconic in rugby history. Written off at home and abroad, Martin Johnson's men were given no hope of success against the world champion Springboks in their own backyard. But a combination of brilliant coaching, astute selections and outstanding players laid the foundations for the touring side's outstanding attacking mindset and brutal stonewall defence.

On the other side was a team expected to stamp their authority on the tourists and confirm their place as the best side on the planet. But with political, racial and economic scandals swirling around the Springbok camp, plus a rookie coach parachuted into office just before the tour began, the hosts were under huge pressure.

In a Test series that will go down in legend as one of the most compelling of all time, the sides could barely be separated. This is the inside story from both camps as they battle for supremacy, lifting the lid like never before as a huge cast of characters look back on those extraordinary weeks and the impact it had on their lives and careers thereafter. Hilarious, insightful and spine-chilling, Tom English and Peter Burns provide the perfect read for all Lions fans.

This feature require that you enable JavaScript in your browser.
END_OF_DOCUMENT_TOKEN_TO_BE_REPLACED

This feature require that you enable JavaScript in your browser.
END_OF_DOCUMENT_TOKEN_TO_BE_REPLACED

This feature require that you enable JavaScript in your browser.
END_OF_DOCUMENT_TOKEN_TO_BE_REPLACED