The Fragility of Bodies (Paperback) 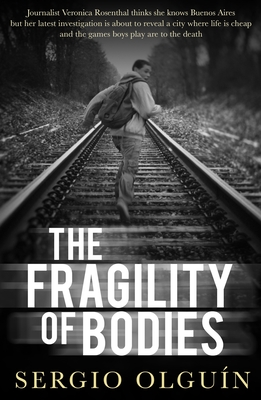 When she hears about the suicide of a Buenos Aires train driver who has left a note confessing to four mortal 'accidents' on the train tracks, journalist Veronica Rosenthal decides to investigate. For the police the case is closed (suicide is suicide), for Veronica it is the beginning of a journey that takes her into an unfamiliar world of grinding poverty, crime-infested neighborhoods, and train drivers on commuter lines haunted by the memory of bodies hit at speed by their locomotives in the middle of the night.

Aided by a train driver with whom she has a tumultuous and reckless affair, a junkie in rehab and two street kids willing to risk everything for a can of Coke, she uncovers a group of men involved in betting on working-class youngsters convinced to play Russian roulette by standing in front of fast-coming trains to see who endures the longest.

This feature require that you enable JavaScript in your browser.
END_OF_DOCUMENT_TOKEN_TO_BE_REPLACED

This feature require that you enable JavaScript in your browser.
END_OF_DOCUMENT_TOKEN_TO_BE_REPLACED

This feature require that you enable JavaScript in your browser.
END_OF_DOCUMENT_TOKEN_TO_BE_REPLACED