Life Lessons from the Ocean: Soothing Wisdom from the Sea (Hardcover) 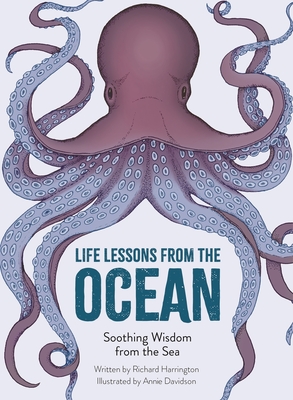 <p><b>This beautifully illustrated book is a celebration of the majesty of the ocean – a soothing and calming tome for when life on dry land is overwhelming. </b><br><br>In an increasingly complicated world we are <b>turning to nature</b> more and more to gain a better <b>understanding of ourselves </b>and the complexities and anxieties in our life. The ocean is a calming constant in our world and we can learn a huge amount from its vast depths. <br><br>The ocean makes up seventy-one per cent of the earth's surface and is filled with marine life and mystery. In this beautifully illustrated gift book, marine biologist Richard Harrington reveals over <b>60 secrets of the ocean</b>, and how we can learn from them. From learning to go with the flow of the tide to taking inspiration from starfish about how to handle setbacks there is a <b>lesson for everyone</b> in this beautiful book. Combined with <b>gorgeous illustrations</b> by Annie Davidson this book is perfect for those who are seeking some inspiration from life between the waves.</p>

Richard Harrington is a marine biologist and writer. He has written a book about living without plastic, How to Live Plastic Free, after being inspired by a trip to a seabird colony where he helped free birds and their chicks from trash. A regular writer for Coast Magazine in the UK, he has been consulted on several documentaries such as the BBC’s Blue Planet 2 and Blue Planet UK, Sky Ocean Rescue, Hugh Fearnley-Whittingstall’s Fish Fight series and the feature film The End of the Line. He also contributed a chapter to a recent book Rewilding: Real Life Stories. Annie Davidson is a Melbourne-based illustrator whose drawings have appeared on textiles, picture books, shop windows and stationery around the world, with clients including Lonely Planet and Converse, among others. She is inspired by Japanese woodblock prints, botanical art and nature—especially forests, tropical landscapes, coral reefs and cactus gardens. You can see more of her whimsical illustrations on her Instagram page @anniesarahdesign or on her website—www.anniedavidson.bigcartel.com

This feature require that you enable JavaScript in your browser.
END_OF_DOCUMENT_TOKEN_TO_BE_REPLACED

This feature require that you enable JavaScript in your browser.
END_OF_DOCUMENT_TOKEN_TO_BE_REPLACED

This feature require that you enable JavaScript in your browser.
END_OF_DOCUMENT_TOKEN_TO_BE_REPLACED