Pro Eto = That's What (ARC Classics: New Translations of Great Poetry of the Past) (Paperback) 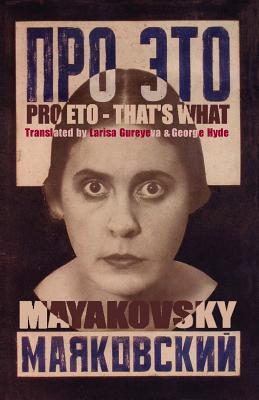 Vladimir Mayakovsky was one of the towering literary figures of pre- and post-revolutionary Russia, speaking as much to the working man (he often employed the rough talk of the streets and revolutionary rhetoric in his poetry) as to other poets (his creative fascination with sound and form, linguistic metamorphosis and variation made him a sort of 'poet's poet', the doyen, if not the envy, of his contemporaries, Pasternak among them). His poetry, influenced by Whitman and Verhaeren and strangely akin to modern rock poetry in its erotic thrust, bluesy complaints and cries of pain, not to mention its sardonic humour, is at once aggressive, mocking and tender, and often fantastic or grotesque. Pro Eto - That's What is a long love poem detailing the pain and suffering inflicted on the poet by his lover and her final rejection of him. But as well as being an agonising parable of separation and betrayal, it is also a political work, highly critical of Lenin's reforms of Soviet Socialism. The publication of That's What is something of a landmark for not only is this the first time that this seminal work has appeared in its entirety in translation, but it is illustrated with the 11 inspired photomontages that Alexander Rodchenko designed to interleave and illuminate the text, illustrations which inaugurate a world of new possibilities in combining verbal and visual forms of expression and which are reproduced in colour (as originally conceived) for the first time.

This feature require that you enable JavaScript in your browser.
END_OF_DOCUMENT_TOKEN_TO_BE_REPLACED

This feature require that you enable JavaScript in your browser.
END_OF_DOCUMENT_TOKEN_TO_BE_REPLACED

This feature require that you enable JavaScript in your browser.
END_OF_DOCUMENT_TOKEN_TO_BE_REPLACED