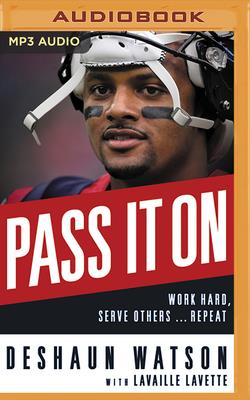 By Deshaun Watson, Lavaille Lavette (With), Dabo Swinney (Foreword by)
Email or call for price and availability
Special Order

Houston Texans quarterback Deshaun Watson is one of the most promising young players in the NFL, but he believes that true success lies in leading his team from a perspective of service. In this inspiring, practical book, Deshaun illustrates how the seven qualities of a servant leader can lead to a more successful life.

Deshaun Watson was only eleven when his family received a house from Atlanta Falcons running back Warrick Dunn through Dunn's charity, Homes for the Holidays. But that early gift left a lasting impression, teaching Deshaun that generosity and service to others are important parts of true success.

Now a star in his own right, and the most promising young player in the NFL, Deshaun reveals the lessons that have guided him throughout his life. From Deshaun's early days in Gainesville, Georgia, where he nursed his mother through cancer, to his years at Clemson--where he graduated in three years while being nominated for the Heisman twice--to his first few seasons in the NFL, Deshaun has distinguished himself as a leader by putting the others first. In Pass It On, Deshaun opens up about the seven core values that have guided him on his own journey.

Interweaving stories from his life with practical advice that every reader can apply, Deshaun demonstrates how true strength lies in putting others first.

This feature require that you enable JavaScript in your browser.
END_OF_DOCUMENT_TOKEN_TO_BE_REPLACED

This feature require that you enable JavaScript in your browser.
END_OF_DOCUMENT_TOKEN_TO_BE_REPLACED

This feature require that you enable JavaScript in your browser.
END_OF_DOCUMENT_TOKEN_TO_BE_REPLACED