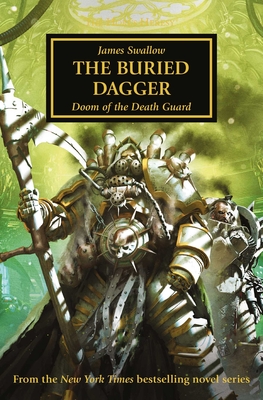 This is book number 54 in the The Horus Heresy series.

Book 54 in the bestselling series, The Horus Heresy.

The skies darken over Terra as the final battle for the Throne looms ever closer... As the Traitor primarchs muster to the Warmaster’s banner, it is Mortarion who is sent ahead as the vanguard of the Traitor forces. But as he and his warriors make way, they become lost in the warp and stricken by a terrible plague. Once thought of as unbreakable, the legendary Death Guard are brought to their knees. To save his Legion, Mortarion must strike a most terrible bargain that will damn his sons for eternity. Meanwhile, in the cloisters of Holy Terra, a plot is afoot to create sedition and carnage in advance of the Horus’s armies. Taking matters into his own hands, Malcador the Sigillite seeks to put a stop to any insurrection but discovers a plot that he will need all of his cunning and battlecraft to overcome.

James Swallow is the author of the Horus Heresy novels Fear to Tread and Nemesis, which both reached the New York Times bestseller lists. Also for the Horus Heresy, he has written The Flight of the Eisenstein, The Buried Dagger and a series of audio dramas featuring the character Nathaniel Garro, the prose versions of which have now been collected into the anthology Garro. For Warhammer 40,000, he is best known for his four Blood Angels novels, the audio drama Heart of Rage, and his two Sisters of Battle novels. His short fiction has appeared in Legends of the Space Marines and Tales of Heresy.

This feature require that you enable JavaScript in your browser.
END_OF_DOCUMENT_TOKEN_TO_BE_REPLACED

This feature require that you enable JavaScript in your browser.
END_OF_DOCUMENT_TOKEN_TO_BE_REPLACED

This feature require that you enable JavaScript in your browser.
END_OF_DOCUMENT_TOKEN_TO_BE_REPLACED