Runner: A short story about a long run (Paperback) 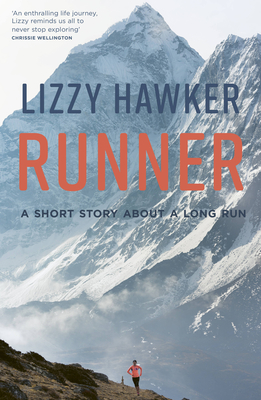 This is the complete story of long-distance runner Lizzy Hawker’s journey from a school girl running the streets of London to a world record-breaking athlete racing on mountains.

Scared witless and surrounded by a sea of people, Lizzy Hawker stands in the church square at the centre of Chamonix on a late August evening, waiting for the start of the Ultra Trail du Mont Blanc. The mountains towering over the pack of runners promise a gruelling 8,600 metres of ascent and descent over 158 kilometres of challenging terrain that will test the feet, legs, heart and mind. These nervous moments before the race signal not just the beginning of nearly twenty-seven hours of effort that saw Lizzy finish as first woman, but the start of the career of one of Britain’s most successful endurance athletes. She went on to become the 100km Women’s World Champion, win the Ultra Trail du Mont Blanc an unprecedented five times, hold the world record for 24 hours road running and become the first woman to stand on the overall winners’ podium at Spartathlon.

An innate endurance and natural affinity with the mountains has led Lizzy to push herself to the absolute limits, including a staggering 320 kilometre run through the Himalayas, from Everest Base Camp to Kathmandu in Nepal. Lizzy’s remarkable spirit was recognised in 2013 when she was a National Geographic Adventurer of the Year. These ultimate challenges ask not just what the feet and legs can do, but question the inner thoughts and contemplations of a runner.

Lizzy’s astonishing story uncovers the physical, mental and emotional challenges that runners go through at the edge of human endurance – inspiring us to get out of the chair and go running in the mountains.

Inspired by mountains and wilderness, Lizzy Hawker 'fell' into the world of ultra-distance and endurance running more by chance than by design. Endurance has always been a way of life for Lizzy, rather than a sport. But having the courage to take some unexpected opportunities opened doors, and her achievements snowballed both on the road and the trail. She is the world record holder for 24hrs and was the 2006 world champion in 100km on the road. She is also 4-time winner of The North Face Ultra Trail du Mont Blanc, and in 2011 set a new record running from Everest Base Camp to Kathmandu.

‘A book that will make you think and, of course, want to go running in the mountains.’

‘Runner is beautifully written and as packed with pure inspiration (and possibility) as any book ever written on the subject, destined to become a classic of the genre.’

‘Runner is beautifully written and as packed with pure inspiration (and possibility) as any book ever written on the subject, destined to become a classic of the genre.’

'Britain’s most distinctive female ‘ultra runner’, coming first in the UTMB five times, taking gold in the Women’s 100km World Championships in Korea in 2006, setting a new women’s world record for 24 hours on the road in the 2011 Commonwealth Championships and a new course record at the sunbaked 246 km Spartathlon in 2012.

But Hawker’s inspirational memoir does not focus on the figures. She’s more interested in why she is able to push herself beyond normal limits, and how running makes her feel. Her book is strong on Buddhist philosophy and the peace that comes with living fully in the now.'

'She's held the world record for distance covered in 24 hours and is a five-time winner of the Ultra Trail du Mont Blanc. Runner follows her through that 100 mile race, breaking off to explore what driver her, and the physical, mental and emotional challenge of pushing the limits.'

‘The astonishing Lizzy Hawker’s story provides a much-needed female slant on the sport. Where this could have been an insufferable list of extremes endured, Hawker’s generosity of spirit and faith in what running can do for one’s soul makes it a rather moving tribute to what all of us might be capable of.’

'About what it means to be a runner, facing the highs and the lows, being full of doubt, but also determined. This book will inspire and enthuse you to move outside of your comfort zone and live life.'

‘A book that will make you think and, of course, want to go running in the mountains.’

This feature require that you enable JavaScript in your browser.
END_OF_DOCUMENT_TOKEN_TO_BE_REPLACED

This feature require that you enable JavaScript in your browser.
END_OF_DOCUMENT_TOKEN_TO_BE_REPLACED

This feature require that you enable JavaScript in your browser.
END_OF_DOCUMENT_TOKEN_TO_BE_REPLACED