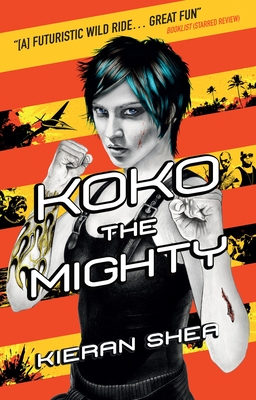 With an outstanding Ultimate Sanction bounty still on her head, Koko Martstellar (ex-mercenary and saloon madam extraordinaire) and Jedidiah Flynn (former orbital sky-cop) have narrowly escaped death in paradise.  Rescued during a storm, Koko and Flynn are taken in by what amounts to a self-sufficient outlander cult. To save Flynn’s life, Koko barters her warrior skills and assists the de-civ group in fending off their most imminent threat: a horde of genetic-mutant raiders. However, even with the group’s foes bested and their idealist lifestyle somewhat enticing, being among the outlander de-civs doesn’t sit well with Koko. In spite of  the de-civ group’s hospitality and Flynn’s arguing that they have it pretty good, Koko suspects something is amiss. People within the outlander group’s interlocking compounds keep disappearing with flimsy explanations—people like the girl who died on the cliff before Koko and Flynn’s rescue—and soon the group’s leadership assesses Koko as a threat to their secret agenda. As the mystery unfolds, Koko’s limits and loyalties—perhaps even her love for Flynn—will be tested.


And as if that isn’t enough, bounty agent Wire has managed to track down Koko and, after a little politicking, is preparing to lead an army of genetic-mutant raiders in a last-man-standing battle against the cult . . .

Kieran Shea’s fiction has appeared in many publications including Ellery Queen Mystery Magazine, Thuglit, Dogmatika, and Crimefactory. He has been nominated for the Story South’s Million Writers Award twice. He divides his time between Annapolis, Maryland and Ocean City, New Jersey.

"Fast-paced, wise-ass, crackling with action and snark, this is a science fiction adventure with style and brio." - Count Gore

"plenty of fighting, some cool tech (mostly, but not all, military) and sketches of this future society (with emphasis on the pleasure industries)" -  Robert McGrath

This feature require that you enable JavaScript in your browser.
END_OF_DOCUMENT_TOKEN_TO_BE_REPLACED

This feature require that you enable JavaScript in your browser.
END_OF_DOCUMENT_TOKEN_TO_BE_REPLACED

This feature require that you enable JavaScript in your browser.
END_OF_DOCUMENT_TOKEN_TO_BE_REPLACED