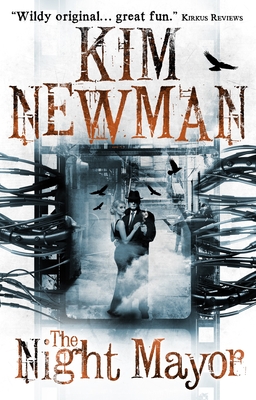 Welcome to the City made from a dream. But this isn’t any dream; it is the dark and haunting nightmare of a killer.

It is the near future and old-fashioned movies, or “flatties”, have been replaced by Dreams, virtual reality scenarios written by professional Dreamers. When infamous criminal Truro Daine escapes imprisonment, he flees into the City, an artificial world of his own creation, where he rules as the all-powerful Night Mayor.

Now, detective Dreamer Tom Tunney and Susan Bishopric, author of romance Dreams, must join forces to track him down. But how do you hunt the Night Mayor in a city populated by a dense crowd of strangely familiar characters, where it’s always two-thirty in the morning, shots never kill and the creator is omnipresent in every drop of falling rain…?

Kim Newman is a well known and respected author and movie critic. He writes regularly for Empire Magazine and contributes to The Guardian, The Times, Time Out and others. He makes frequent appearances on radio and TV. He has won the Bram Stoker, International Horror Guild, British Fantasy and British Science Fiction Awards and been nominated for the Hugo and World Fantasy Awards.

This feature require that you enable JavaScript in your browser.
END_OF_DOCUMENT_TOKEN_TO_BE_REPLACED

This feature require that you enable JavaScript in your browser.
END_OF_DOCUMENT_TOKEN_TO_BE_REPLACED

This feature require that you enable JavaScript in your browser.
END_OF_DOCUMENT_TOKEN_TO_BE_REPLACED