The Steel Tsar (Nomad of the Time Streams #3) (Paperback) 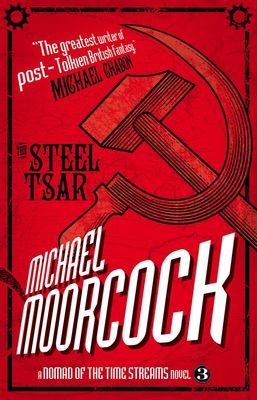 By Michael Moorcock
$9.95
Email or call for price.

THE FINAL NOVEL IN SF GRANDMASTER MICHAEL MOORCOCK'S EPIC STEAMPUNK TRILOGY - BACK IN PRINT FOR THE FIRST TIME IN OVER 10 YEARS!

Bastable encounters an alternate 1941 where the Great War never happened and Great Britain and Germany became allies in a world intimidated by Japanese imperialism. In this world's Russian Empire, Bastable joins the Russian Imperial Airship Navy and is subsequently imprisoned by the rebel Dugashvii, the 'Steel Tsar', also known as Joseph Stalin.

Michael Moorcock is an acclaimed British science fiction and fantasy author. He has written many highly regarded series, including the Elric, Hawkmoon and Corum sequences. The Science Fiction and Fantasy Writers of America named him a Grandmaster of SF in 2008 and he has won the Nebula, John W. Campbell, World Fantasy, British Fantasy and Bram Stoker Awards.

This feature require that you enable JavaScript in your browser.
END_OF_DOCUMENT_TOKEN_TO_BE_REPLACED

This feature require that you enable JavaScript in your browser.
END_OF_DOCUMENT_TOKEN_TO_BE_REPLACED

This feature require that you enable JavaScript in your browser.
END_OF_DOCUMENT_TOKEN_TO_BE_REPLACED