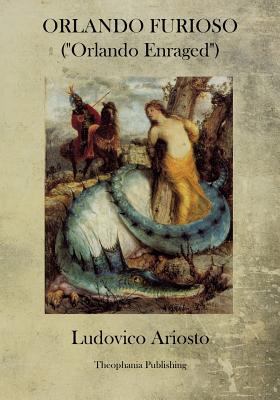 Thank you for checking out this book by Theophania Publishing. We appreciate your business and look forward to serving you soon. We have thousands of titles available, and we invite you to search for us by name, contact us via our website, or download our most recent catalogues. Orlando furioso (The Frenzy of Orlando, more literally Mad Orlando; in Italian furioso is seldom capitalized) is an Italian romantic epic by Ludovico Ariosto which has exerted a wide influence on later culture. The earliest version appeared in 1516, although the poem was not published in its complete form until 1532. Orlando Furioso is a continuation of Matteo Maria Boiardo's unfinished romance Orlando Innamorato ("Orlando in Love", published posthumously in 1495). The action takes place against the background of the war between, on the one side, Charlemagne and his Christian paladins, and, on the other side, the Saracen army which is attempting to invade Europe. However, Ariosto has little concern for historical or geographical accuracy, and the poem wanders at will from Japan to the Hebrides, as well as including many fantastical and magical elements, such as a trip to the moon and an array of fantastical creatures including a gigantic sea monster called the orc and the hippogriff. Many themes are interwoven in its complicated, episodic structure, but the most important plot is the paladin Orlando's unrequited love for the pagan princess Angelica, which develops into the madness of the title. After this comes the love between the female Christian warrior Bradamante and the Saracen Ruggiero, who are supposed to be the ancestors of Ariosto's patrons, the d'Este family of Ferrara. The poem is divided into forty-six cantos, each containing a variable number of eight-line stanzas in ottava rima (a rhyme scheme of abababcc). Ottava rima had been used in previous Italian romantic epics, including Luigi Pulci's Morgante and Boiardo's Orlando Innamorato. Ariosto's work is 38,736 lines long in total, making it one of the longest poems in European literature.

This feature require that you enable JavaScript in your browser.
END_OF_DOCUMENT_TOKEN_TO_BE_REPLACED

This feature require that you enable JavaScript in your browser.
END_OF_DOCUMENT_TOKEN_TO_BE_REPLACED

This feature require that you enable JavaScript in your browser.
END_OF_DOCUMENT_TOKEN_TO_BE_REPLACED