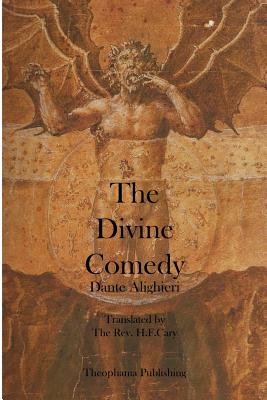 Thank you for checking out this book by Theophania Publishing. We appreciate your business and look forward to serving you soon. We have thousands of titles available, and we invite you to search for us by name, contact us via our website, or download our most recent catalogues. The Divine Comedy is composed of 14,233 lines that are divided into three canticas (Ital. pl. cantiche), Inferno (Hell), Purgatorio (Purgatory), and Paradiso (Paradise), each consisting of 33 cantos (Ital. pl. canti). An initial canto serves as an introduction to the poem and is generally considered to be part of the first cantica, bringing the total number of cantos to 100. The number three is prominent in the work, represented here by the length of each cantica. The verse scheme used, terza rima, is hendecasyllabic (lines of eleven syllables), with the lines composing tercets according to the rhyme scheme aba, bcb, cdc, ded, .... The poem is written in the first person, and tells of Dante's journey through the three realms of the dead, lasting from the night before Good Friday to the Wednesday after Easter in the spring of 1300. The Roman poet Virgil guides him through Hell and Purgatory; Beatrice, Dante's ideal woman, guides him through Heaven. Beatrice was a Florentine woman whom he had met in childhood and admired from afar in the mode of the then fashionable courtly love tradition which is highlighted in Dante's earlier work La Vita Nuova. In central Italy's political struggle between Guelphs and Ghibellines, Dante was part of the Guelphs, who in general favored the Papacy over the Holy Roman Emperor. Florence's Guelphs split into factions around 1300, the White Guelphs, and the Black Guelphs. Dante was among the White Guelphs who were exiled in 1302 by the Lord Mayor Cante de' Gabrielli di Gubbio, after troops under Charles of Valois entered the city, at the request of Pope Boniface VIII, who supported the Black Guelphs. This exile, which lasted the rest of Dante's life, shows its influence in many parts of the Comedy, from prophecies of Dante's exile to Dante's views of politics to the eternal damnation of some of his opponents. In Hell and Purgatory, Dante shares in the sin and the penitence respectively. The last word in each of the three parts of the Divine Comedy is stelle, "stars.

This feature require that you enable JavaScript in your browser.
END_OF_DOCUMENT_TOKEN_TO_BE_REPLACED

This feature require that you enable JavaScript in your browser.
END_OF_DOCUMENT_TOKEN_TO_BE_REPLACED

This feature require that you enable JavaScript in your browser.
END_OF_DOCUMENT_TOKEN_TO_BE_REPLACED