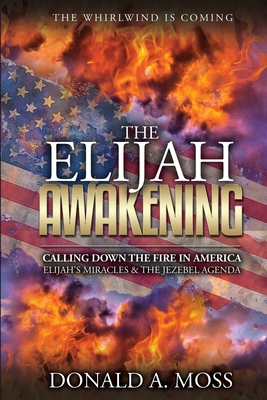 An unspeakable horror lurks beneath the surface of the highly suspect 2020 presidential election, blasphemous Biden policies, fake news, woke cancel culture, elected lunatics and an economy on the verge of implosion. Alas, an ancient supernatural evil is destroying America.

This same dark power destroyed another nation long ago.

In ancient Israel, Almighty God called Elijah the Tishbite, out of the mountains, to challenge evil rulers and an abominable religion that reveled in nature worship, sexual perversity and child sacrifice. In a series of mind-boggling confrontations, Elijah called down heavenly fire three times to prove God's power and destroy two companies of enemy soldiers sent to kill him.

God is about to do it again - the Elijah Awakening is coming to Make America Great Again (MAGA).

Donald A. Moss, former pastor/evangelist and prophetic voice of The Third Day: A Revelation of the Coming Revival, Writers Club Press 2002, takes you on another incredible spiritual journey to witness the coming supernatural revolution - the "God Solution," to America's terrible problem.

The Elijah Awakening foretells of what God is about to do in America. It will be a time of spiritual warfare against evil powers and principalities. Anointed believers will rise up in the spirit of Elijah, to call down fire on demonic strongholds destroying our nation. God is not finished with America. Indeed, the whirlwind is coming and we will Make America God's Again "

This feature require that you enable JavaScript in your browser.
END_OF_DOCUMENT_TOKEN_TO_BE_REPLACED

This feature require that you enable JavaScript in your browser.
END_OF_DOCUMENT_TOKEN_TO_BE_REPLACED

This feature require that you enable JavaScript in your browser.
END_OF_DOCUMENT_TOKEN_TO_BE_REPLACED