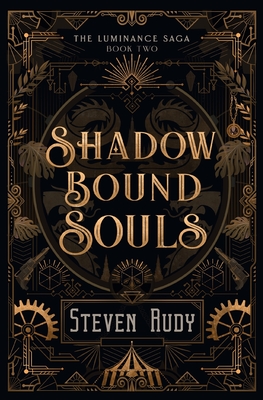 The frontier of alchemy, magic and machines nears a breaking point.

Book two of The Luminance Saga is an action-packed sci-fi fantasy adventure, charged with a tension inherited from the epic climax of book one. Shadow Bound Souls picks up where the first novel left off, with a band of heroes stranded in a world on the brink of war.

The Sagean Lord has emerged.

While the Wrythen's influence grows stronger, the Sagean and his power-hungry acolytes, the Court of Dragons, are intent on delivering the gem of souls to the Temple of Ama; where the Sintering Fountain can transform the acolytes into Luminaries.

Meanwhile, the band of heroes find themselves separated in a world starting to tear itself apart. Having suffered a huge loss, Ellaria and Elias must escape the Mainland with the Sagean's agents pursuing them. When Elias becomes sick, Ellaria decides to hide amongst the Showman's Traveling Show of Wonders. But their journey is shadowed by darkness and when troupe members turn up murdered, Ellaria struggles to find the killer amongst her company.

Far away in the Warhawk Mountains, the three young rogues are stranded with the Tempest Stone. Aimless about what to do, their paths take a turn when they discover the horrifying magnitude of the Sagean's return to power, the Scree.

Shadow Bound Souls continues the steampunk saga with a sequel that takes the plot to greater depths, while expanding upon the immersive world; with a ending that hurtles the series toward the coming World War.

This feature require that you enable JavaScript in your browser.
END_OF_DOCUMENT_TOKEN_TO_BE_REPLACED

This feature require that you enable JavaScript in your browser.
END_OF_DOCUMENT_TOKEN_TO_BE_REPLACED

This feature require that you enable JavaScript in your browser.
END_OF_DOCUMENT_TOKEN_TO_BE_REPLACED