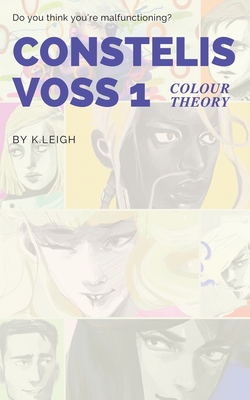 The series opens on a dystopic planet-sized ship in the far future, where a very advanced android receives a personality file from the 90s. He is the only one of his kind.

His name is Alex, and in his quest for understanding just how he got to be an android-and on the planet-sized ship known as CONSTELIS VOSS-he finds curiously familiar faces who help him color in the blanks.

As the coincidences pile up-friends, objects, scenes, motifs, and tropes-they start to form a pattern. A pattern that's set against the backdrop of a dystopian, corrupt civilization, with a conveniently very-evil villain.

A pattern that seems, in all its madness, to be directly linked to him.

Something is pulling the strings, and figuring out the mystery is the only way to save himself, his friends, and the future of the very human race itself.

But will he be able solve the mystery without losing himself-and his friends-in the process? The road to hell is paved with good intentions, after all.

Welcome to Constelis Voss, the anime-inspired, psychological sci-fi trilogy nobody asked for, but everyone (probably) deserves.

This feature require that you enable JavaScript in your browser.
END_OF_DOCUMENT_TOKEN_TO_BE_REPLACED

This feature require that you enable JavaScript in your browser.
END_OF_DOCUMENT_TOKEN_TO_BE_REPLACED

This feature require that you enable JavaScript in your browser.
END_OF_DOCUMENT_TOKEN_TO_BE_REPLACED