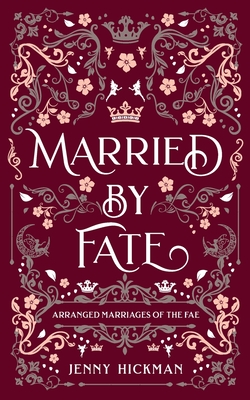 Lady Roisin knew her fate was to marry a human prince, helping to heal the rift between the humans and the fae. Luckily, she fell desperately in love with her betrothed, the dashing heir to the Vellanian throne, Prince Alrec. One day soon, she will be his queen. A day Roisin has been looking forward to for as long as she can remember.

As the king's youngest son, Prince Caiman knew his fate was to live in his older brother Alrec's shadow. One day soon, Alrec will be crowned king. A day Caiman has been dreading for as long as he can remember.

When tragedy strikes the kingdom, Caiman is forced to ascend to the throne in his brother's stead. But becoming King of Vellana means upholding the alliance with the fae by marrying his brother's betrothed. And marrying a woman who has despised him for years cannot end in happily-ever-after...

Married by Fate is part of the Arranged Marriages of the Fae series, a multi-author collaboration of short standalone novels.

This book rates a 4 on the Romantic Content Rating System (RCRS) ie. fade to black

This feature require that you enable JavaScript in your browser.
END_OF_DOCUMENT_TOKEN_TO_BE_REPLACED

This feature require that you enable JavaScript in your browser.
END_OF_DOCUMENT_TOKEN_TO_BE_REPLACED

This feature require that you enable JavaScript in your browser.
END_OF_DOCUMENT_TOKEN_TO_BE_REPLACED