It Gives You Strength (Paperback) 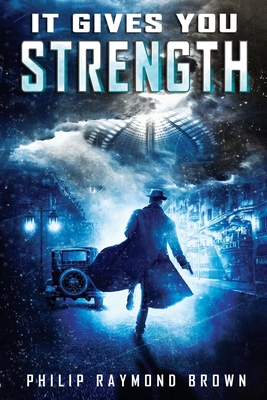 By Philip Raymond Brown
$15.99
On Our Shelves Now

An alien on a rescue mission to the distant planet Earth is transported into the dying body of bootlegger Ryan Costello. Upon his death, Costello's body is reanimated by the alien, and endowed with supernatural powers. Unfortunately, the body is so damaged from years of alcohol abuse that the alien's memory and his vital files are corrupted.

All that remains of his mission plan is one phrase: "Find the one called Mike Kelly." Complicating matters, the alien soon discovers that Kelly is the leader of a criminal gang of World War veterans, who are battling mobster Jack "Legs" Diamond for control of the lucrative Canada/New York rum-running market. Upon recognizing Costello's enhanced abilities and physical strength, Kelly forces the alien into the mob. Since Kelly is his only chance of discovering and completing his mission, the alien agrees. Costello soon learns his crucial task - to free an alien child from the infamous Craig Colony before his home world dispatches an armada so massive that its mere entry into the atmosphere would devastate the Earth.

"... Brown's prose undoubtedly captures the reader on the page. He makes the 1920s in upstate New York feel as exciting as an old-time thriller, with gun-wielding big shots, intense rivalries, and the perfect wildcard character."

This feature require that you enable JavaScript in your browser.
END_OF_DOCUMENT_TOKEN_TO_BE_REPLACED

This feature require that you enable JavaScript in your browser.
END_OF_DOCUMENT_TOKEN_TO_BE_REPLACED

This feature require that you enable JavaScript in your browser.
END_OF_DOCUMENT_TOKEN_TO_BE_REPLACED