Behind the Slickrock Curtain: A Project Petrichor Environmental Thriller (Paperback) 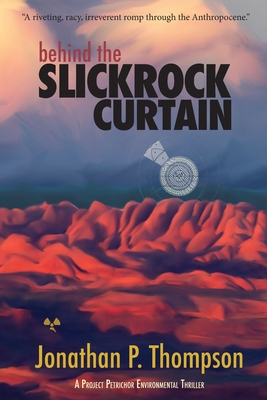 In the not so distant future, as the planet burns, the nation reels from the effects of a pandemic, Truth is on the brink of extinction, and the late-president tweets madly from the grave, Durango artist Peter Simons heads into Utah's Canyon Country to scout locations for his biggest project ever. When Peter fails to return on time, and mercenaries working for the federal government start asking questions about him, Peter's wife Eliza Santos launches a search. She calls on Peter's old friend and her ex-lover, disgraced journalist and purveyor of fake news, Malcolm Brautigan, for help.

As they search for Peter they unwittingly uncover a tangled scheme led by oligarchs, an alluring petroleum engineer, and corrupt government officials to ravage a sacred landscape with a tar sands operation. But the more they learn, the more they suspect that it is merely a smokescreen for a much bigger operation involving a long-lost deposit of high-grade uranium. But are the perpetrators trying to destroy the planet? Or save it? And why are they so interested in Malcolm's memories?

Behind the Slickrock Curtain, Part I of the Project Petrichor Environmental Thriller Series, is a riveting, racy, irreverent romp through the Anthropocene and an insightful, humorous, and sometimes scathing exploration of eco-despair, disinformation in the post-truth age, love, friendship, and the power of memory and place.

This feature require that you enable JavaScript in your browser.
END_OF_DOCUMENT_TOKEN_TO_BE_REPLACED

This feature require that you enable JavaScript in your browser.
END_OF_DOCUMENT_TOKEN_TO_BE_REPLACED

This feature require that you enable JavaScript in your browser.
END_OF_DOCUMENT_TOKEN_TO_BE_REPLACED