Something is Killing the Children Vol. 4 (Paperback) 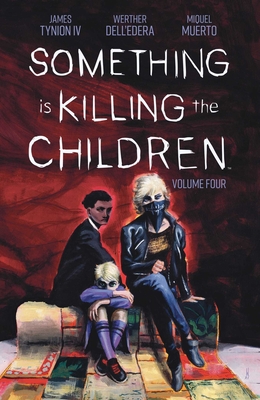 The origin of Erica Slaughter, monster hunter, is revealed in this volume of the Eisner Award-nominated horror series.

Erica Slaughter went to hell and back in Archer’s Peak, but that may be nothing compared to the events that forged her at the House of Slaughter. What events brought Erica to the House of Slaughter? And what did she have to do to join the Order of St. George? Erica Slaughter’s origins are finally revealed in this volume of the Eisner Award-nominated series from GLAAD Award-winning author James Tynion IV (The Woods, Batman) and artist Werther Dell’Edera (Razorblades). Collects Something is Killing the Children #16-20.

James Tynion IV is a comic book writer, best known for his work on the Batman franchise for DC Comics. James' comics career began with co-writing the back-up stories on Scott Snyder and Greg Capullo's character defining run on BATMAN, which would lead to his making his own name on a number of Bat-Centric series. This work would culminate in James serving as the showrunner of two consecutive weekly comic series, BATMAN ETERNAL and BATMAN & ROBIN ETERNAL. Recently, he has become the writer of the massive cross-over project, BATMAN/TEENAGE MUTANT NINJA TURTLES, bringing two of the most successful franchises together for the first time. The first issue was one of the best selling comic issues of 2015.

The Young Adult Science Fiction epic THE WOODS broke all records for original series at the company when it was released in 2014, and has recently been optioned for television by Universal Cable Productions. He has also penned the critical successes MEMETIC, COGNETIC and UFOLOGY for the publisher. James has also recently stepped into the shoes of one of the most iconic anti-heroes in the comics medium with the critically acclaimed relaunch of CONSTANTINE: THE HELLBLAZER with Ming Doyle and Riley Rossmo.

This feature require that you enable JavaScript in your browser.
END_OF_DOCUMENT_TOKEN_TO_BE_REPLACED

This feature require that you enable JavaScript in your browser.
END_OF_DOCUMENT_TOKEN_TO_BE_REPLACED

This feature require that you enable JavaScript in your browser.
END_OF_DOCUMENT_TOKEN_TO_BE_REPLACED