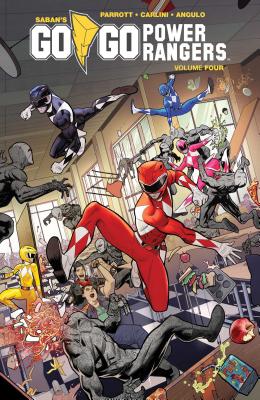 This is book number 4 in the Mighty Morphin Power Rangers series.

After failing several times against the Mighty Morphin Power Rangers, Rita Repulsa returns to a conquered planet to retrieve a weapon she vowed to never use.

In the aftermath of the bestselling Shattered Grid event, the Mighty Morphin Power Rangers must stop Rita’s sinister plan to acquire a new weapon. But when Jason and Trini follow Rita into a magic portal, they get more than they bargained for when their connection to the Morphin Grid gets crossed and their powers become transposed. Written by Ryan Parrott (Star Trek: Manifest Destiny) and illustrated by Eleonora Carlini (Batgirl), this arc of Saban’s Go Go Power Rangers gives the Power Rangers a new look like never before!

This feature require that you enable JavaScript in your browser.
END_OF_DOCUMENT_TOKEN_TO_BE_REPLACED

This feature require that you enable JavaScript in your browser.
END_OF_DOCUMENT_TOKEN_TO_BE_REPLACED

This feature require that you enable JavaScript in your browser.
END_OF_DOCUMENT_TOKEN_TO_BE_REPLACED