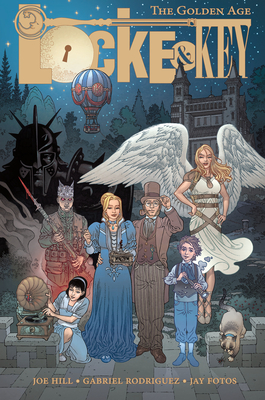 This is book number 7 in the Locke & Key series.

Take a trip through the past and unlock moments from Keyhouse's long history that expand the saga of the Locke family in this collection of stories including the crossover with Neil Gaiman's Sandman Universe!

Contains three prequel short stories, "Small World," "Open the Moon," and, collected for the first time, "Face the Music," leading into the gut-wrenching tour de force that begins with ...In Pale Battalions Go... and culminates with the Sandman Universe crossover Hell & Gone.

Each of these individual stories takes a glimpse into the lives of the Locke family ancestors from the early 20th century as they use the keys to fight battles big and small. From the killing fields of Europe during WWI to the depths of Hell, the Lockes struggle desperately to keep the dark forces of their world at bay.

Joe Hill is the #1 New York Times bestselling author of Full Throttle, The Fireman, Heart-Shaped Box, and NOS4A2, recently made into a TV series from AMC. His horror novella In the Tall Grass, co-written with Stephen King, was made into a feature film from Netflix. His book of short stories, 20th Century Ghosts, won the Bram Stoker Award and British Fantasy Award for Best Collection. He earned the Eisner Award for Best Writer for his long-running comic book series, Locke & Key, featuring the eye-popping art of Gabriel Rodríguez.

Born in Santiago, Chile, Gabriel Rodríguez began working as an illustrator in the late '90s and in 2002 started drawing books for IDW Publishing, including CSI, George Romero's Land of the Dead, and Beowulf, amongst others. In 2007, he co-created the award-winning series Locke & Key with Joe Hill. He continued developing other creator-owned projects: the Eisner-winning Little Nemo: Return to Slumberland, with Eric Shanower; Sword of Ages; and the gritty sci-fi adventure Onyx, with Chris Ryall. As of 2020, his collaboration with Hill continues on several new Locke & Key projects.

This feature require that you enable JavaScript in your browser.
END_OF_DOCUMENT_TOKEN_TO_BE_REPLACED

This feature require that you enable JavaScript in your browser.
END_OF_DOCUMENT_TOKEN_TO_BE_REPLACED

This feature require that you enable JavaScript in your browser.
END_OF_DOCUMENT_TOKEN_TO_BE_REPLACED