What Is Christianity? (Paperback) 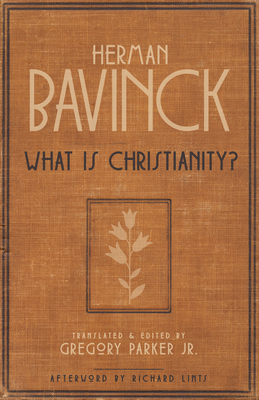 In this book, Dutch theologian Herman Bavinck (1854-1921) provides a historical sketch on the nature of Christianity and the unifying power of Christ. He proceeds from unity to diversity--on what the Christian church agrees and the areas where it differs. It is apologetic and evangelistic, ecumenical and Reformed, and historical and theological in scope. In this succinct book, Bavinck traces the history of Christian doctrine and life, distinguishing the East from the West, and then focusing on the West through the Reformation to the twentieth century. Both at the beginning and the end of the book, he places before the reader what he deemed the most important religious and theological question of the day: Who is Jesus?

"It is no small task which Dr. Bavinck has undertaken, to tell in sixty-two small pages all that Christianity is, and that, in a series in which it is brought into comparison with other 'great religions'. He has fulfilled this task, however, in a most admirable manner. His method is, first, to point out what all Christians are agreed upon; and then to give an historical account of Christianity in its origins and it its progressive manifestations in the great forms of the Orthodox Eastern, the Romish, the Lutheran, Reformed Churches, with further descriptions of the forms it has taken since, in Anabaptism and Socinianism, and the New Protestantism rooted in the Enlightenment. His plan thus resolves itself into an informal sketch of the historical development of Christianity. This sketch is written with remarkable grasp of details and an equally remarkable power of synthesis. We cannot imagine how the work could be done better." --B.B. Warfield.

This feature require that you enable JavaScript in your browser.
END_OF_DOCUMENT_TOKEN_TO_BE_REPLACED

This feature require that you enable JavaScript in your browser.
END_OF_DOCUMENT_TOKEN_TO_BE_REPLACED

This feature require that you enable JavaScript in your browser.
END_OF_DOCUMENT_TOKEN_TO_BE_REPLACED