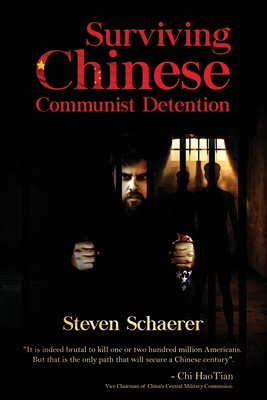 One minute, you're a successful 27 year-old American entrepreneur, co-founding a business in Beijing, China. Years of your life have been dedicated to learning Mandarin, establishing a career and building a life for yourself in East Asia.

Next, you're falsely and arbitrarily accused of "illegal employment" by CCP (Chinese Communist Party) authorities, kidnapped, and locked in the back of a Chinese prison transport vehicle.

This was a very real and horrifying experience for native Californian, Steven Schaerer, who spent five years of his life living and working in Beijing, China.

Steven was transported to a black-site prison compound on the outskirts of Beijing where he endured a month of CCP detention, torture, and conditions so horrific, "suicide" warnings were plastered on the walls.

All of your belongings have been taken. You don't know where you are, how long you'll be detained and you've just been thrown into a foreign prison cell with 16 violent inmates. The last thing you hear is a CCP guard slamming the barred metal door shut behind you.

Steven Schaerer survived communist Chinese incarceration, torture, and deportation. Steven is a proud first generation American from California's Bay Area, and is the proud bi-racial son of immigrant parents from Switzerland and Mexico.

He was the first person in his family to attend university earning a degree in chemistry from Sonoma State University in Northern California. In addition to English, Steven also speaks Mandarin, Spanish, and successfully co-founded a business in Beijing in his mid-20's.

Steven is a staunch advocate for and defender of freedom, liberty, the Constitution, free-market capitalism, Human Rights and the American way of life.

This feature require that you enable JavaScript in your browser.
END_OF_DOCUMENT_TOKEN_TO_BE_REPLACED

This feature require that you enable JavaScript in your browser.
END_OF_DOCUMENT_TOKEN_TO_BE_REPLACED

This feature require that you enable JavaScript in your browser.
END_OF_DOCUMENT_TOKEN_TO_BE_REPLACED