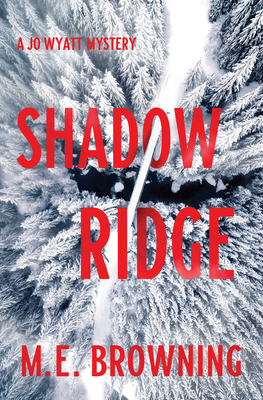 Death is one click away when a string of murders rocks a small Colorado town in the first mesmerizing novel in M. E. Browning's A Jo Wyatt Mystery series.

Echo Valley, Colorado, is a place where the natural beauty of a stunning river valley meets a budding hipster urbanity. But when an internet stalker is revealed to be a cold-blooded killer in real life the peaceful community is rocked to its core.

It should have been an open-and-shut case: the suicide of Tye Horton, the designer of a cutting-edge video game. But Detective Jo Wyatt is immediately suspicious of Quinn Kirkwood, who reported the death. When Quinn reveals an internet stalker is terrorizing her, Jo is skeptical. Doubts aside, she delves into the claim and uncovers a link that ties Quinn to a small group of beta-testers who had worked with Horton. When a second member of the group dies in a car accident, Jo's investigation leads her to the father of a young man who had killed himself a year earlier. But there's more to this case than a suicide, and as Jo unearths the layers, a more sinister pattern begins to emerge--one driven by desperation, shame, and a single-minded drive for revenge.

As Jo closes in, she edges ever closer to the shattering truth--and a deadly showdown that will put her to the ultimate test.

M.E. BROWNING writes the Jo Wyatt Mysteries. The first in the series, Shadow Ridge, won the Colorado Book Award for Mystery and the silver medal in the popular fiction category of the Florida Book Awards. The adventures continue in Mercy Creek, which launches in October 2021. Writing as Micki Browning, she penned the Agatha-nominated and award-winning Mer Cavallo mysteries, Adrift and Beached, and her short stories and nonfiction have appeared in anthologies, textbooks, diving and mystery magazines. Micki’s novels draw on her twenty-two years of experience in law enforcement. An FBI National Academy graduate, she retired as a captain before turning to a life of crime…fiction.  Visit mebrowning.com to learn more.

“Retired police captain Browning...is best on Jo’s professional frustration with a department that values her labors as long as she doesn’t step out of line.”
—Kirkus Reviews

“Browning’s Jo should be with readers for a long time.”
—Newsday

“Winter’s coming, and this is a great book to curl up by a fire and enjoy.”
—Durango Herald

"An engaging premise, briskly paced through a labyrinth of mystery. There’s something to be said for good ole’ fashioned suspense. Enjoy this one."
—Steve Berry, New York Times bestselling author of the Cotton Malone series

"Such a terrific book...Fans of Sue Grafton and Julia Spencer-Fleming will find a new favorite series."
—Hank Phillippi Ryan, USA Today bestselling author of The First to Lie

This feature require that you enable JavaScript in your browser.
END_OF_DOCUMENT_TOKEN_TO_BE_REPLACED

This feature require that you enable JavaScript in your browser.
END_OF_DOCUMENT_TOKEN_TO_BE_REPLACED

This feature require that you enable JavaScript in your browser.
END_OF_DOCUMENT_TOKEN_TO_BE_REPLACED