Game of Strength and Storm (Paperback) 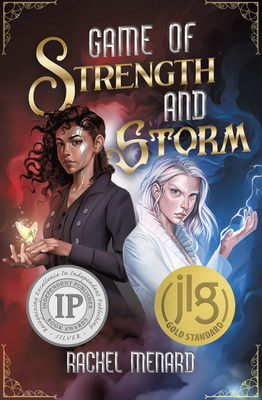 Victory is the only option.

Once a year, the Olympian Empresses grant the wishes of ten people selected by a lottery--for a price. Seventeen-year-old Gen, a former circus performer, wants the freedom of her father, who was sentenced to life in prison for murders she knows he didn't commit. Castor plans to carry the island Arcadia into the future in place of her brother, Pollux, but only after the Empresses force a change in her island's archaic laws that require a male heir. To get what they want, Gen and Castor must race to complete the better half of ten nearly impossible labors. They have to catch the fastest ship in the sea, slay the immortal Hydra, defeat a gangster called the Boar, and capture the flesh-eating Mares, among other deadly tasks. Gen has her magic, her ability to speak to animals, her inhuman strength--and the help of Pollux, who's been secretly pining for her for years. But Castor has her own gifts: the power of the storms, along with endless coin. Only one can win. The other walks away with nothing--if she walks away at all.

This feature require that you enable JavaScript in your browser.
END_OF_DOCUMENT_TOKEN_TO_BE_REPLACED

This feature require that you enable JavaScript in your browser.
END_OF_DOCUMENT_TOKEN_TO_BE_REPLACED

This feature require that you enable JavaScript in your browser.
END_OF_DOCUMENT_TOKEN_TO_BE_REPLACED