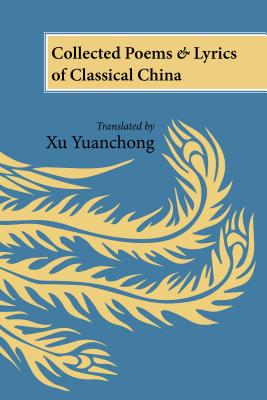 By Xu Yuanchong (Translated by)
$27.00
Email or call for price

Chinese poetry has over 3,000 years of history, and with it much diversity and influence. American poets such as Ezra Pound, William Carlos Williams, Kenneth Rexroth, Gary Snyder, and David Hinton have been influenced by and even translated the poetry of ancient China. In Xu Yuanchong’s Collected Poems and Lyrics of Classical China, a Chinese scholar and translator brings revered works to new readers translated into English from his native tongue.

Xu Yuanchong’s Collected Poems and Lyrics of Classical China contains more than 450 ancient poems from the Han, Tang, Yuan, Ming, and Qing dynasties, as well as poetry by the great Su Shi and song lyrics from throughout China’s history. This bilingual edition presents the Simplified Chinese text side by side with the English translation and includes pinyin phonetic guides (ruby) to aid in studying the Chinese. From pastoral lyrics to romantic odes, these poems illustrate for the reader the natural beauty of ancient China and capture the essence of its storied antiquity.

Xu Yuanchong is a scholar and translator of ancient Chinese poetry into French and English. Since 1983 he has been a professor in the School of Journalism and Communication at Peking University. In 2010 he won the Lifetime Achievement Award from the Translators Association of China. In 2014 he became the first Chinese recipient of the Aurora Borealis Prize at the World Congress of the International Federation of Translations.

This feature require that you enable JavaScript in your browser.
END_OF_DOCUMENT_TOKEN_TO_BE_REPLACED

This feature require that you enable JavaScript in your browser.
END_OF_DOCUMENT_TOKEN_TO_BE_REPLACED

This feature require that you enable JavaScript in your browser.
END_OF_DOCUMENT_TOKEN_TO_BE_REPLACED