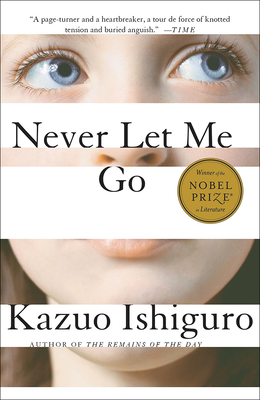 From the Booker Prize-winning author of "The Remains of the Day "comes a devastating new novel of innocence, knowledge, and loss. As children Kathy, Ruth, and Tommy were students at Hailsham, an exclusive boarding school secluded in the English countryside. It was a place of mercurial cliques and mysterious rules where teachers were constantly reminding their charges of how special they were.
Now, years later, Kathy is a young woman. Ruth and Tommy have reentered her life. And for the first time she is beginning to look back at their shared past and understand just what it is that makes them special and how that gift will shape the rest of their time together. Suspenseful, moving, beautifully atmospheric, Never Let Me Go" "is another classic by the author of The Remains of the Day.

Kazuo Ishiguro is the author of five previous novels, including The Remains of the Day," " which won the Booker Prize and became an international best seller. His work has been translated into twenty-eight languages. In 1995 he received an Order of the British Empire for service to literature, and in 1998 was named a Chevalier de l Ordre des Arts et des Lettres by the French government. He lives in London with his wife and daughter."

This feature require that you enable JavaScript in your browser.
END_OF_DOCUMENT_TOKEN_TO_BE_REPLACED

This feature require that you enable JavaScript in your browser.
END_OF_DOCUMENT_TOKEN_TO_BE_REPLACED

This feature require that you enable JavaScript in your browser.
END_OF_DOCUMENT_TOKEN_TO_BE_REPLACED