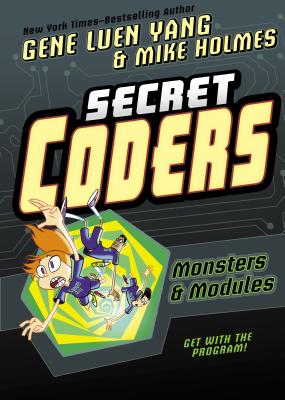 This is book number 6 in the Secret Coders series.

The Coders always knew their programming skills would take them far, but they never guessed they would take them to another dimension! Or to be accurate, one dimension less—to save humanity, Hopper, Eni, and Josh must travel to Flatland, a dangerous two-dimensional world ruled by polygons. If they can return home safely with a turtle of light, they might just stand a chance in their final showdown with Dr. One-Zero!

Gene Luen Yang writes, and sometimes draws, comic books and graphic novels. As the Library of Congress’ fifth National Ambassador for Young People’s Literature, he advocates for the importance of reading, especially reading diversely. American Born Chinese, his first graphic novel from First Second Books, was a National Book Award finalist, as well as the winner of the Printz Award and an Eisner Award. His two-volume graphic novel Boxers & Saints won the L.A. Times Book Prize and was a National Book Award Finalist. His other works include Secret Coders (with Mike Holmes), The Shadow Hero (with Sonny Liew), New Super-Man from DC Comics (with various artists), and the Avatar: The Last Airbender series from Dark Horse Comics (with Gurihiru). In 2016, he was named a MacArthur Foundation Fellow.

Mike Holmes has drawn for the comics series Secret Coders, Bravest Warriors, Adventure Time, and the viral art project Mikenesses. His books include the True Story collection (2011), This American Drive (2009), and Shenanigans. He lives with a cat named Ella, who is his best buddy.

"Though readers may be sad to say goodbye to the world and characters, it's been a glitch-free runtime, and they'll be satisfied at the final bits and bytes." —Kirkus

"Gene Luen Yang’s talent is prodigious, his enthusiasm contagious . . . Even this confirmed technophobe was ready to learn coding." —Katherine Applegate, author of Crenshaw and The One and Only Ivan

"By the end of Secret Coders, readers will learn the three major ways that code is organized, right alongside Hopper and Eni, not as something dry or rote, but something transformative." —Wired

This feature require that you enable JavaScript in your browser.
END_OF_DOCUMENT_TOKEN_TO_BE_REPLACED

This feature require that you enable JavaScript in your browser.
END_OF_DOCUMENT_TOKEN_TO_BE_REPLACED

This feature require that you enable JavaScript in your browser.
END_OF_DOCUMENT_TOKEN_TO_BE_REPLACED