The Dragons of Dorcastle (The Pillars of Reality) (Paperback) 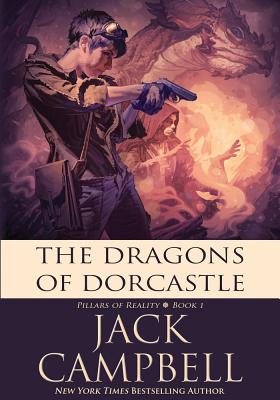 Dematr is a world ruled by the diametrically opposed Mage and Mechanic Guilds. For centuries, the two Great Guilds have been bitter rivals. But now a Storm approaches, one that could sweep away everything that humans have built. Only one person has any chance of uniting enough of the world behind to stop the Storm.

Mari is a brilliant young Mechanic, just out of the Guild Halls, where she has spent most of her life learning how to run the steam locomotives and other devices of her Guild. Alain is the youngest Mage ever to learn how to change the world he sees with the power of his mind. Each has been taught that the works of the other's Guild are frauds.

But when their caravan is destroyed, they must join forces. Their union could save the world from the approaching Storm, but it could also upend the Great Guilds who will stop at nothing to preserve their power. Mari and Alain will have to choose between protecting their lives and their Guilds, or risking everything to protect Dematr from the coming Storm.

This feature require that you enable JavaScript in your browser.
END_OF_DOCUMENT_TOKEN_TO_BE_REPLACED

This feature require that you enable JavaScript in your browser.
END_OF_DOCUMENT_TOKEN_TO_BE_REPLACED

This feature require that you enable JavaScript in your browser.
END_OF_DOCUMENT_TOKEN_TO_BE_REPLACED