The Wrath of the Great Guilds (Pillars of Reality #6) (Paperback) 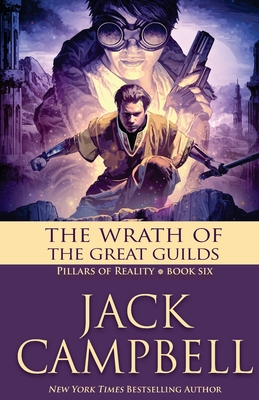 This is book number 6 in the Pillars of Reality series.

New York Times best-selling author Jack Campbell's epic series, The Pillars of Reality, reaches its exciting conclusion.The Great Guilds, fearing the loss of their control of the world of Dematr, have gathered their power and joined it with the relentless legions of the Empire. The full might of that host will fall upon the fortress city of Dorcastle. If Dorcastle falls, the revolt led by Master Mechanic Mari and Mage Alain will fail, and their world will soon descend into chaos.Only Mari, believed to be the daughter of an ancient prophecy, can inspire the people and lead the defense of Dorcastle. The prophecy says she has a chance to win, but it doesn't say she will survive. Alain will stand by her, both willing to die for the other, but neither one knows if their sacrifices will mean victory.As they battle the Imperial legions and see friends fall, Mari and Alain face their greatest challenges. And if they somehow win in the face of impossible odds, neither one can be certain what sort of world that victory will produce.

"Jack Campbell" is the pen name of John G. Hemry, a retired naval officer who graduated from the U.S. Naval Academy in Annapolis before serving with the surface fleet and in a variety of other assignments. He is the author of The Lost Fleet series as well as the Stark's War series and the Paul Sinclair series. His short fiction appears frequently in Analog magazine. He lives with his indomitable wife and three children in Maryland. Visit him on the Web at jack-campbell.com.

This feature require that you enable JavaScript in your browser.
END_OF_DOCUMENT_TOKEN_TO_BE_REPLACED

This feature require that you enable JavaScript in your browser.
END_OF_DOCUMENT_TOKEN_TO_BE_REPLACED

This feature require that you enable JavaScript in your browser.
END_OF_DOCUMENT_TOKEN_TO_BE_REPLACED