The Servants of the Storm (Pillars of Reality #5) (Paperback) 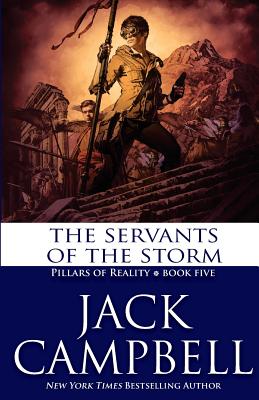 This is book number 5 in the Pillars of Reality series.

A Storm that will wreck a world threatens Dematr. Only Mari, one of the Mechanics who control all technology through their Guild, has a chance to stop it. She and Mage Alain have survived numerous attempts to kill them and have gained many more followers, but the Storm of chaos, born of centuries of enslavement, grows ever closer. Mari leads an army now. She and Alain must fight together to bind back the Broken Kingdom and build a force strong enough to defeat the might of the Great Guilds. But the Storm has many Servants who seek to preserve or gain personal power or wealth, or fear the New Day that Mari seeks to bring to the world. And Mari knows that victory will mean nothing if the precious knowledge brought long ago to their world is destroyed. In order to save it, Alain and Mari will have to pierce through the heart of their enemies' power and confront once more a place of ancient nightmare.

Jack Campbell is the pen name for John G. Hemry, a retired naval officer. John graduated from the U.S. Naval Academy before serving with the surface fleet and in a variety of other assignments. He is the author of the Lost Fleet and the Lost Stars series, as well as the Stark's War series and the Paul Sinclair series.

This feature require that you enable JavaScript in your browser.
END_OF_DOCUMENT_TOKEN_TO_BE_REPLACED

This feature require that you enable JavaScript in your browser.
END_OF_DOCUMENT_TOKEN_TO_BE_REPLACED

This feature require that you enable JavaScript in your browser.
END_OF_DOCUMENT_TOKEN_TO_BE_REPLACED