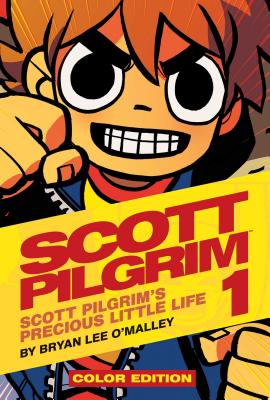 This is book number 1 in the Scott Pilgrim series.

Bryan Lee O'Malley is a Canadian cartoonist currently living in Los Angeles. His six-volume Scott Pilgrim series was a New York Times bestseller, an LA Times Book Prize finalist, and won an Eisner Award, two Harvey Awards, a Doug Wright Award, and a Joe Shuster Award. In 2010, Scott Pilgrim was adapted into a critically-acclaimed major motion picture (from Universal) and video game (from Ubisoft). His books (including Lost at Sea, Seconds, and Snotgirl ) have been translated into over 20 languages.

This feature require that you enable JavaScript in your browser.
END_OF_DOCUMENT_TOKEN_TO_BE_REPLACED

This feature require that you enable JavaScript in your browser.
END_OF_DOCUMENT_TOKEN_TO_BE_REPLACED

This feature require that you enable JavaScript in your browser.
END_OF_DOCUMENT_TOKEN_TO_BE_REPLACED