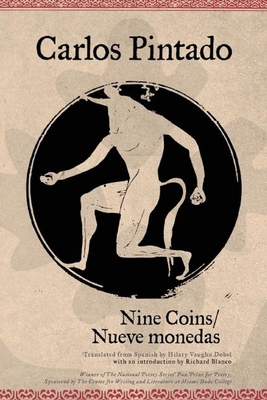 Named a Notable Translation of 2015 by World Literature Today The Moon has been selected as one of Vancouver Poetry House's 10 Best Poems of 2015 This poem, translated from the original Spanish, unfolds as a litany of the many ways the moon has been described. One long, complex sentence links all the previous iterations, while a second, much shorter sentence isolates the image of yet another moon. The prose-poem form seems to contain the patch of night sky from which that new apprehension--the moon reflected in the vision of a solitary witness, the poem's speaker--arrives.
--New York Times Magazine, Featured Poem, The Moon The poems are thoughtful and intelligent, frequently referencing mythology, literature, architecture; they require time to ponder, read, and re-read....Reflective souls will find much that resonates here.
--San Diego Book Review It is not hard to see why this collection won the Paz Prize for Poetry. Pintado seems a worthy successor to Octavio Paz, whose own poems owe so much to surrealism and the world of dreams.
--Midst of Things Cuban-American Pintado, recipient of the Paz Prize for Poetry, meditates on myths, legends, labyrinths, and the relationships between love, fears, and dreams in this bilingual collection.
--Publishers Weekly, Fall 2015 Announcements Translator Hilary Vaughn Dobel does an excellent job of reproducing Pintado's tone and diction; her translation stands confidently on its own, without hewing any more closely than necessary to the original. While much of the poetry in Nueve monedas does rhyme in Spanish, Vaughn Dobel has not sought to reproduce that rhyme in English, the right decision in this case because of how Pintado uses rhyme in his own work, more often to end enjambed lines than not, a subtle use more suggestive of English-language New Formalists than the more baroque Spanish-language poets of midcentury.
--World Literature Today The urgency and presence in Pintado's poems feel as if the poet's very life depended on writing them. They are possessed by a unique, intangible quality that arrests the reader and commands attention. His work is intimate yet boundless, moving easily between form and free verse, prose poems and long poems, whether capturing the everyday streets of Miami Beach or leading us into the mythic and mystical worlds of his imagination.
--Richard Blanco, author of The Prince of Los Cocuyos: A Miami Childhood Translated by Hilary Vaughn Dobel. Nine Coins/Nueve monedas is a palimpsest of love, fears, dreams, and the intimate landscapes where the author seeks refuge. These poems appear like small islands of salvation, covered with the brief splendor of the coins people sometimes grab hold of, taking the form of a very personal and often devastating map. Each poem is a song at the edge of an abyss; an illusory gold coin obtained as a revelation; a song of hope and understanding. The volume's dreamlike geography prompts the reader to revisit the thread, the labyrinth, and the Minotaur's legends. The night streets of South Beach, Alexandria, and many other cities, lit by the fading torches, seem to guide us in conversation with characters who are long dead. The Paz Prize for Poetry is presented by the National Poetry Series and The Center at Miami Dade College. This annual award--named in the spirit of the late Nobel Prize-winning poet, Octavio Paz--honors a previously unpublished book of poetry written originally in Spanish by an American resident. An open competition is held each May, when an esteemed Spanish-speaking poet selects a winning manuscript. The book will be published in a bilingual edition by Akashic Books. The winning poet will also receive a $2,000 cash prize.

Carlos Pintado is a Cuban American writer, playwright, and award-winning poet who immigrated to the United States in the early 1990s. His book Autorretrato en azul received the prestigious Sant Jordi International Prize for Poetry, and his book El azar y los tesoros was a finalist for Spain's Adonais Prize in 2008. His work has been translated into English, Italian, German, French, Turkish, Portuguese, and Italian. Nine Coins/Nueve monedas is his latest collection of poetry.

This feature require that you enable JavaScript in your browser.
END_OF_DOCUMENT_TOKEN_TO_BE_REPLACED

This feature require that you enable JavaScript in your browser.
END_OF_DOCUMENT_TOKEN_TO_BE_REPLACED

This feature require that you enable JavaScript in your browser.
END_OF_DOCUMENT_TOKEN_TO_BE_REPLACED